A. C. Doyle – A Reminiscence Of Cricket Poem

A Reminiscence Of Cricket Poem by Arthur Conan Doyle

A Reminiscence Of Cricket Poem

Between 1900 and 1907 Arthur Conan Doyle played in ten first-class matches, mainly for the Marylebone Cricket Club, London. He was a lower-order, right-handed batsman and occasional slow bowler. He scored 231 runs in 18 innings, with a top score of 43.

On August 25, 1900 he took the wicket of W.G. Grace during a match against London County at Crystal Palace. The famous batsman skied one of the balls delivered by Doyle and was caught out by wicket- keeper for 110.

Doyle wrote the following poem to commemorate the occasion 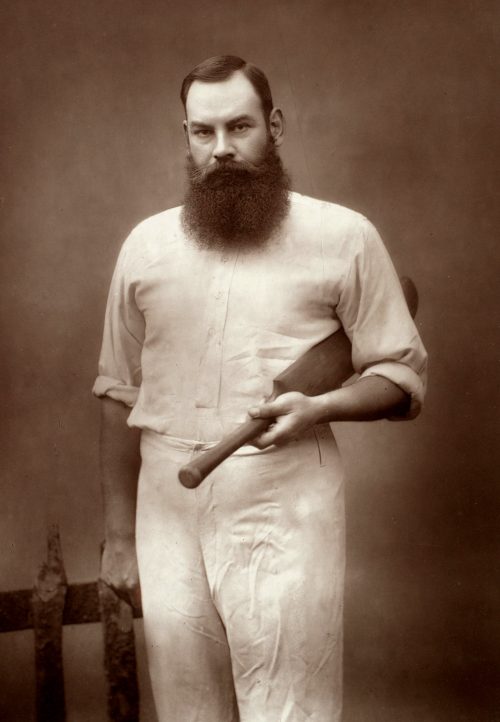 A Reminiscence Of Cricket Poem

Once in my heyday of cricket,
One day I shall ever recall!
I captured that glorious wicket,
The greatest, the grandest of all.

Before me he stands like a vision,
Bearded and burly and brown,
A smile of good humoured derision
As he waits for the first to come down.

A statue from Thebes or from Knossos,
A Hercules shrouded in white,
Assyrian bull-like colossus,
He stands in his might.

With the beard of a Goth or a Vandal,
His bat hanging ready and free,
His great hairy hands on the handle,
And his menacing eyes upon me.

And I – I had tricks for the rabbits,
The feeble of mind or eye,
I could see all the duffer’s bad habits
And where his ruin might lie.

The capture of such might elate one,
But it seemed like one horrible jest
That I should serve tosh to the great one,
Who had broken the hearts of the best.

Well, here goes! Good Lord, what a rotter!
Such a sitter as never was dreamt;
It was clay in the hands of the potter,
But he tapped it with quiet contempt.

The second was better – a leetle;
It was low, but was nearly long-hop;
As the housemaid comes down on the beetle
So down came the bat with a chop.

He was sizing me up with some wonder,
My broken-kneed action and ways;
I could see the grim menace from under
The striped peak that shaded his gaze.

The third was a gift or it looked it-
A foot off the wicket or so;
His huge figure swooped as he hooked it,
His great body swung to the blow.

Still when my dreams are night-marish,
I picture that terrible smite,
It was meant for a neighboring parish,
Or any place out of sight.

But – yes, there’s a but to the story –
The blade swished a trifle too low;
Oh wonder, and vision of glory!
It was up like a shaft from a bow.

Up, up like a towering game bird,
Up, up to a speck in the blue,
And then coming down like the same bird,
Dead straight on the line that it flew.

Good Lord, it was mine! Such a soarer
Would call for a safe pair of hands;
None safer than Derbyshire Storer,
And there, face uplifted, he stands

Wicket keep Storer, the knowing,
Wary and steady of nerve,
Watching it falling and growing
Marking the pace and curve.

I stood with my two eyes fixed on it,
Paralysed, helpless, inert;
There was ‘plunk’ as the gloves shut upon it,
And he cuddled it up to his shirt.

Out – beyond question or wrangle!
Homeward he lurched to his lunch!
His bat was tucked up at an angle,
His great shoulders curved to a hunch.

Walking he rumbled and grumbled,
Scolding himself and not me;
One glove was off, and he fumbled,
Twisting the other hand free

Did I give Storer the credit
The thanks he so splendidly earned?
It was mere empty talk if I said it,
For Grace had already returned.

Leave a reply to A. C. Doyle – A Reminiscence Of Cricket Poem
Selected Authors
Popular