Abraham Lincoln – INTERVIEW WITH SCHUYLER COLFAX ON THE MORNING OF APRIL 14, 1865

INTERVIEW WITH SCHUYLER COLFAX ON THE MORNING OF APRIL 14, 1865 by Abraham Lincoln

INTERVIEW WITH SCHUYLER COLFAX ON THE MORNING OF APRIL 14, 1865.

Mr. Colfax, I want you to take a message from me to the miners whom you visit. I have very large ideas of the mineral wealth of our nation. I believe it practically inexhaustible. It abounds all over the Western country, from the Rocky Mountains to the Pacific, and its development has scarcely commenced. During the war, when we were adding a couple of millions of dollars every day to our national debt, I did not care about encouraging the increase in the volume of our precious metals. We had the country to save first. But now that the rebellion is overthrown, and we know pretty nearly the amount of our national debt, the more gold and silver we mine, we make the payment of that debt so much the easier. “Now,” said he, speaking with more emphasis, “I am going to encourage that in every possible way. We shall have hundreds of thousands of disbanded soldiers, and many have feared that their return home in such great numbers might paralyze industry, by furnishing, suddenly, a greater supply of labor than there will be demand for. I am going to try to attract them to the hidden wealth of our mountain ranges, where there is room enough for all. Immigration, which even the war has not stopped, will land upon our shores hundreds of thousands more per year from overcrowded Europe. I intend to point them to the gold and silver that wait for them in the West. Tell the miners for me, that I shall promote their interests to the utmost of my ability; because their prosperity is the prosperity of the nation; and,” said he, his eye kindling with enthusiasm, “we shall prove, in a very few years, that we are indeed the treasury of the world.”

Leave a reply to Abraham Lincoln – INTERVIEW WITH SCHUYLER COLFAX ON THE MORNING OF APRIL 14, 1865
Selected Authors
Popular 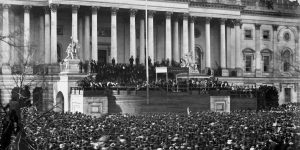