“My poor flowers are quite dead,” said little Ida, “they were so pretty yesterday evening, and now all the leaves are hanging down quite withered. What do they do that for,” she asked, of the student who sat on the sofa; she liked him very much, he could tell the most amusing stories, and cut out the prettiest pictures; hearts, and ladies dancing, castles with doors that opened, as well as flowers; he was a delightful student. “Why do the flowers look so faded to-day?” she asked again, and pointed to her nosegay, which was quite withered.

“Don’t you know what is the matter with them?” said the student. “The flowers were at a ball last night, and therefore, it is no wonder they hang their heads.”

“Yes indeed, they can,” replied the student. “When it grows dark, and everybody is asleep, they jump about quite merrily. They have a ball almost every night.”

“Can children go to these balls?”

“Yes,” said the student, “little daisies and lilies of the valley.”

“Where do the beautiful flowers dance?” asked little Ida.

“Have you not often seen the large castle outside the gates of the town, where the king lives in summer, and where the beautiful garden is full of flowers? And have you not fed the swans with bread when they swam towards you? Well, the flowers have capital balls there, believe me.”

“I was in the garden out there yesterday with my mother,” said Ida, “but all the leaves were off the trees, and there was not a single flower left. Where are they? I used to see so many in the summer.”

“They are in the castle,” replied the student. “You must know that as soon as the king and all the court are gone into the town, the flowers run out of the garden into the castle, and you should see how merry they are. The two most beautiful roses seat themselves on the throne, and are called the king and queen, then all the red cockscombs range themselves on each side, and bow, these are the lords-in-waiting. After that the pretty flowers come in, and there is a grand ball. The blue violets represent little naval cadets, and dance with hyacinths and crocuses which they call young ladies. The tulips and tiger-lilies are the old ladies who sit and watch the dancing, so that everything may be conducted with order and propriety.”

“But,” said little Ida, “is there no one there to hurt the flowers for dancing in the king’s castle?”

“No one knows anything about it,” said the student. “The old steward of the castle, who has to watch there at night, sometimes comes in; but he carries a great bunch of keys, and as soon as the flowers hear the keys rattle, they run and hide themselves behind the long curtains, and stand quite still, just peeping their heads out. Then the old steward says, ‘I smell flowers here,’ but he cannot see them.”

“Oh how capital,” said little Ida, clapping her hands. “Should I be able to see these flowers?”

“Yes,” said the student, “mind you think of it the next time you go out, no doubt you will see them, if you peep through the window. I did so to-day, and I saw a long yellow lily lying stretched out on the sofa. She was a court lady.”

“Can the flowers from the Botanical Gardens go to these balls?” asked Ida. “It is such a distance!”

“Oh yes,” said the student, “whenever they like, for they can fly. Have you not seen those beautiful red, white, and yellow butterflies, that look like flowers? They were flowers once. They have flown off their stalks into the air, and flap their leaves as if they were little wings to make them fly. Then, if they behave well, they obtain permission to fly about during the day, instead of being obliged to sit still on their stems at home, and so in time their leaves become real wings. It may be, however, that the flowers in the Botanical Gardens have never been to the king’s palace, and, therefore, they know nothing of the merry doings at night, which take place there. I will tell you what to do, and the botanical professor, who lives close by here, will be so surprised. You know him very well, do you not? Well, next time you go into his garden, you must tell one of the flowers that there is going to be a grand ball at the castle, then that flower will tell all the others, and they will fly away to the castle as soon as possible. And when the professor walks into his garden, there will not be a single flower left. How he will wonder what has become of them!”

“But how can one flower tell another? Flowers cannot speak?”

“No, certainly not,” replied the student; “but they can make signs. Have you not often seen that when the wind blows they nod at one another, and rustle all their green leaves?”

“Can the professor understand the signs?” asked Ida.

“Yes, to be sure he can. He went one morning into his garden, and saw a stinging nettle making signs with its leaves to a beautiful red carnation. It was saying, ‘You are so pretty, I like you very much.’ But the professor did not approve of such nonsense, so he clapped his hands on the nettle to stop it. Then the leaves, which are its fingers, stung him so sharply that he has never ventured to touch a nettle since.”

“Oh how funny!” said Ida, and she laughed.

“How can anyone put such notions into a child’s head?” said a tiresome lawyer, who had come to pay a visit, and sat on the sofa. He did not like the student, and would grumble when he saw him cutting out droll or amusing pictures. Sometimes it would be a man hanging on a gibbet and holding a heart in his hand as if he had been stealing hearts. Sometimes it was an old witch riding through the air on a broom and carrying her husband on her nose. But the lawyer did not like such jokes, and he would say as he had just said, “How can anyone put such nonsense into a child’s head! what absurd fancies there are!”

Then Sophy raised himself, and looked round quite astonished, “There must be a ball here to-night,” said Sophy. “Why did not somebody tell me?”

“Will you dance with me?” said the rough doll.

“You are the right sort to dance with, certainly,” said she, turning her back upon him.

Then she seated herself on the edge of the drawer, and thought that perhaps one of the flowers would ask her to dance; but none of them came. Then she coughed, “Hem, hem, a-hem;” but for all that not one came. The shabby doll now danced quite alone, and not very badly, after all. As none of the flowers seemed to notice Sophy, she let herself down from the drawer to the floor, so as to make a very great noise. All the flowers came round her directly, and asked if she had hurt herself, especially those who had lain in her bed. But she was not hurt at all, and Ida’s flowers thanked her for the use of the nice bed, and were very kind to her. They led her into the middle of the room, where the moon shone, and danced with her, while all the other flowers formed a circle round them. Then Sophy was very happy, and said they might keep her bed; she did not mind lying in the drawer at all. But the flowers thanked her very much, and said,—

“We cannot live long. To-morrow morning we shall be quite dead; and you must tell little Ida to bury us in the garden, near to the grave of the canary; then, in the summer we shall wake up and be more beautiful than ever.”

“No, you must not die,” said Sophy, as she kissed the flowers.

Then the door of the room opened, and a number of beautiful flowers danced in. Ida could not imagine where they could come from, unless they were the flowers from the king’s garden. First came two lovely roses, with little golden crowns on their heads; these were the king and queen. Beautiful stocks and carnations followed, bowing to every one present. They had also music with them. Large poppies and peonies had pea-shells for instruments, and blew into them till they were quite red in the face. The bunches of blue hyacinths and the little white snowdrops jingled their bell-like flowers, as if they were real bells. Then came many more flowers: blue violets, purple heart’s-ease, daisies, and lilies of the valley, and they all danced together, and kissed each other. It was very beautiful to behold.

At last the flowers wished each other good-night. Then little Ida crept back into her bed again, and dreamt of all she had seen. When she arose the next morning, she went quickly to the little table, to see if the flowers were still there. She drew aside the curtains of the little bed. There they all lay, but quite faded; much more so than the day before. Sophy was lying in the drawer where Ida had placed her; but she looked very sleepy.

“Do you remember what the flowers told you to say to me?” said little Ida. But Sophy looked quite stupid, and said not a single word.

“You are not kind at all,” said Ida; “and yet they all danced with you.”

Then she took a little paper box, on which were painted beautiful birds, and laid the dead flowers in it.

“This shall be your pretty coffin,” she said; “and by and by, when my cousins come to visit me, they shall help me to bury you out in the garden; so that next summer you may grow up again more beautiful than ever.”

Her cousins were two good-tempered boys, whose names were James and Adolphus. Their father had given them each a bow and arrow, and they had brought them to show Ida. She told them about the poor flowers which were dead; and as soon as they obtained permission, they went with her to bury them. The two boys walked first, with their crossbows on their shoulders, and little Ida followed, carrying the pretty box containing the dead flowers. They dug a little grave in the garden. Ida kissed her flowers and then laid them, with the box, in the earth. James and Adolphus then fired their crossbows over the grave, as they had neither guns nor cannons. 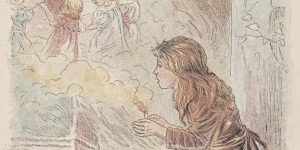 Hans Christian Andersen – Everything in the Right Place

Hans Christian Andersen – What One Can Invent 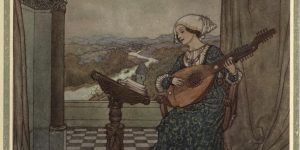