The Duchess of Malfi : The Aragonian Brothers, Ferdinand and the Cardinal 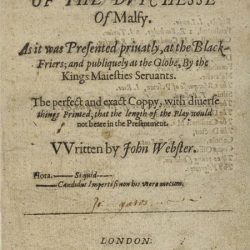 The Cardinal is introduced to the audience initially as the one who has ‘slighted’ Daniel De Bosola who had ‘fallen into the galleys at your service’. There is much bitterness and animosity between the two, and one sees that Bosola who comments on the Cardinal ‘some fellows they say, are possessed with the devil, but this great fellow were able to possess the greatest devil and make him worse’. Indeed, such an indictment on the Cardinal draws an immediate irony that a man of the cloth be so closely associated with the devil. To a certain extent, one sees in him an utterly villainous character.

Our introduction to Ferdinand (Duke of Calabria) is almost simultaneous and no less appealing. His language is crude and with many sexual innuendos ‘he reels from the tilt often’. Antonio speaks of him as having ‘a most perverse and turbulent nature’. The Cardinal, his brother and ‘twin’ as Antonio describes them are that ‘in quality’ of their morals, or lack of it. The Cardinal is a ‘melancholy churchman’ whose ‘spring in his face is nothing but the engendering of toads’ and who ‘did bestow bribes so largely and so impudently’ that he would have been able to do it ‘without heaven’s knowledge’. That Antonio, in all his goodness of heart and ability to recognise the imperceptible goodness of Bosola at this early point of the play certainly makes an impact on the audience with his negative opinion of the Aragonian brothers, who ‘the law to him is like a foul black cobweb to a spider, he makes it his dwelling and a prison to entangle those shall feed him’ of Ferdinand and of the Cardinal who ‘oracles hang at his lips, and verily i believe them, for the devil speaks in them’. Indeed, the ‘right noble Duchess’ that he speaks of immediately after indeed throws a juxtaposition to the evil and perverse Aragonian brothers.

Bosola although under the instruction of Ferdinand as his intelligencer is not about to be deemed evil along with Ferdinand. Indeed, he speaks against the immorality of his association with Ferdinand ‘you a corrupter, me an impudent traitor’. He speaks of Ferdinand’s plan as ‘all an ill man can invent’. Indeed, the true evil of the brothers is brought out when they warn the Duchess against disobeying their orders. ‘your darkest actions, nay, your privatest thoughts will come to light’. One realises that it is not a prophecy but a threat to her. The Cardinal tells her that ‘the marriage night is the entrance to some prison’ and indeed, they do mercilessly imprison her in her own castle when they attain Bosola’s information of her marriage to Antonio. The Cardinal’s relationship with Julia is certainly evidence of his immorality. He is a holy man and yet, indulges in his relationship with Julia. Indeed, that he is the one who is so opposed to the Duchess’s marriage to Antonio creates a blatant irony with his relationship with Julia his mistress.

Ferdinand on learning of his sister’s infidelity is seized with a rage, a pure madness that even the Cardinal remarks on ‘why do you make yourself so wild a tempest?’. Yet, his anger lies not in the fact that she has brought down the family name, as in the Cardinal’s case ‘to purge infected blood’, but because he cannot stand the idea of her being had by another man. His passion for her seems almost sexual ‘my imagination will carry me to see her in the shameful act of sin’ and his intent in finding out the Duchess’s secret husband is to ‘know who leaps my sister’ to ‘fix her in a general eclipse’. Even Pescara sees in Ferdinand not a brother angered at his sister’s disobedience, but ‘a very salamander lives in’s eye, to mock the eager violence of fire’. His anger is obsessive and he becomes lycantrophic later on when he is too controlled by his madness.

The Cardinal on the other hand, leaves him holy vestments to don the outfit of a soldier to banish the Duchess and her family. The comment by the pilgrims ‘so great a lady would have matched herself unto so mean a person? Yet the Cardinal bears himself too cruel’. Indeed, that even the common man was able to see the villain in the Cardinal shows that he is indeed an evil being.

Ferdinand’s torturing the Duchess in her imprisonment is much like that of the predator toying with his prey before making the kill. He gives her a dead man’s hand and uses the artificial figures of her family to make her think that they were killed too, and imprisons her in the presence of madmen to make her go insane with their mindless chatter. He is innately evil and deems her ‘plagued in art’. To a certain extent, one feels that he enjoys the way that he is able to inflict such suffering on her ‘to bring her to despair’. He is sadistic and enjoys to see her in emotional pain that he may ‘feed a fire as great as my revenge which will never slack’.

One feels that Ferdinand’s lycanthropia and the murder of both the Cardinal and Ferdinand is justified as he puts the Duchess through such intense suffering only to blame Bosola in the end when he realises the extent of his actions.

They are truly evil characters who deserve their violent end.