‘Tis said that when
The hands of men
Tamed this primeval wood,
And hoary trees with groans of wo,
Like warriors by an unknown foe,
Were in their strength subdued,
The virgin Earth
Gave instant birth
To springs that ne’er did flow—
That in the sun
Did rivulets run,
And all around rare flowers did blow—
The wild rose pale
Perfumed the gale,
And the queenly lily adown the dale
(Whom the sun and the dew
And the winds did woo),
With the gourd and the grape luxuriant grew.

So when in tears
The love of years
Is wasted like the snow,
And the fine fibrils of its life
By the rude wrong of instant strife
Are broken at a blow—
Within the heart
Do springs upstart
Of which it doth now know,
And strange, sweet dreams,
Like silent streams
That from new fountains overflow,
With the earlier tide
Of rivers glide
Deep in the heart whose hope has died—
Quenching the fires its ashes hide,—
Its ashes, whence will spring and grow
Sweet flowers, ere long,—
The rare and radiant flowers of song! 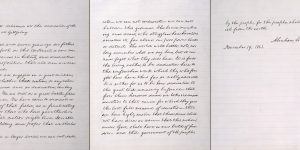 Spirits of the Dead Poem 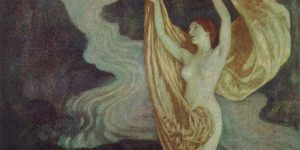 To One in Paradise Poem

The Imp Of The Perverse