Ragtime! Poem : The Guards Came Through and Other Poems by Arthur Conan Doyle 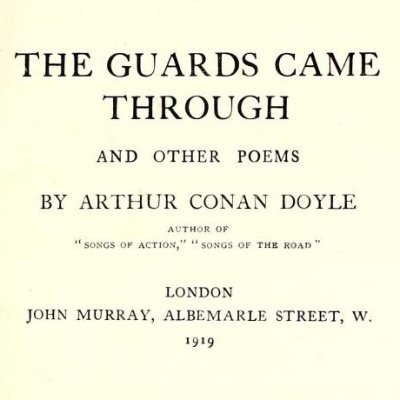 Not published in the first edition of The Guards Came Through.

[“During the catastrophe the band of the Titanic played negro melodies and ragtime until the last moment, when they broke into a hymn.”—Daily Paper.]

RAGTIME! Ragtime! Keep it going still!
Let them hear the ragtime! Play it with a will!
Women in the lifeboats, men upon the wreck,
Take heart to hear the ragtime lilting down the deck.

Ragtime! Ragtime! Yet another tune!
Now the “Darkey Dandy,” now “The Yellow Coon!”
Brace against the bulwarks if the stand’s askew,
Find your footing as you can, but keep the music true!

There’s glowing hell beneath us where the shattered boilers roar.
The ship is listing and awash, the boats will hold no more!
There’s nothing more that you can do, and nothing you can mend.
Only keep the ragtime playing to the end.

Don’t forget the time, boys! Eyes upon the score!
Never heed the wavelets sobbing down the floor!
Play it as you played it when with eager feet
A hundred pair of dancers were stamping to the beat.

Stamping to the ragtime down the lamp-lit deck,
With shine of glossy linen and with gleam of snowy neck,
They’ve other thoughts to think to-night, and other things to do.
But the tinkle of the ragtime may help to see them through.

Shut off, shut off the ragtime! The lights are falling low!
The deck is buckling under us! She’s sinking by the bow!
One hymn of hope from dying hands on dying ears to fall-
Gently the music fades away—and so, God rest us all!