Lies and Lilies : Under the Sunset and Other Stories by Bram Stoker

Claribel lived in peace and happiness with her father and mother, from the time she was a little baby till when, at ten years old, she went to school.

Her parents were good, kind people, who loved truth and tried ever to walk in the paths of the just. They taught Claribel all good things, and her mother, Fridolina, used to bring her when every day she went to visit and comfort the sick.

When Claribel went to school, she was even happier, for not only had she her home as it was ever, but there were many new friends also who were of her own age and whom she came to know and love. The school-mistress was very good and very nice and very old, with beautiful white hair and a sweet gentle face that never looked hard or stern, except when some one told a lie. Then the smile would fade from her face; and it was like the change in the sky when the sun has gone down, and she would look grave, and cry silently. If the child who had been wicked came and confessed the fault and promised never never to tell a lie again, the smile would come back like sunshine. But if the child persisted in the lie her face would look stern, and afterwards the stern look would be in the memory of the liar, even when she was not there.

Every day she told all the children of the beauty of Truth and how a lie was so black and terrible a thing. She would also tell them stories from the Great Book; and one that she loved, and that they loved too, was of the Beautiful City where the good people shall live hereafter.

The children never tired of hearing of that City, like a jasper stone clear as crystal, with its twelve gates with names written thereon, and they used to ask the Mistress questions about the Angel who measured the City with a golden reed. Always towards the end of the story, the Mistresse’s voice would become very grave, and a hush would steal over the children and they would draw closer together in awe as she told them that outside that beautiful city were for ever condemned to stand “whosoever loveth and maketh a lie.”

Then the good Mistress would tell them what a terrible thing it would be to stand there without, and lose all the beauty and eternal glory that lay within. And all for a fault which no human being need ever commit – for telling a lie. People are not very much angry even when a fault has been done, when the truth is told at once; but if a fault is made worse by a lie then everyone is justly angry. If men and women, even fathers and mothers who love their little children very tenderly, are angry, how much more will God be angry against whom the sin of a lie is made.

Claribel loved this story and often cried as she thought of the poor people who will have to stand without the Beautiful City for ever, but she never thought that she would tell a lie herself. Indeed, she never did till temptation came. When people think themselves very good they are in danger of sin, for if we are not ever on the watch against evil we surely do some wrong thing; and as Claribel feared no evil, she was easily led into sin.

The children were all at their sums. A few of them knew their arithmetic and got out their answers and proved them; but some could not get out the answer right, and others stuck and could not get out any answer at all. A couple of naughty ones did not even try to get out the answers, but drew pictures on their slates and wrote their names. Claribel tried to do her sum, but she could not remember 9 times 7, and instead of beginning at “twice one are two” and going on up, she grew idle and lazy and gave up the sum and drew the beginnings of pictures and gave them up too. She looked up at the window thinking of something to draw and saw on the lower panes coloured flowers painted there so as to prevent the children looking at the people outside during lesson time. Claribel fixed on one of these flowers, a lily, and began to draw it. 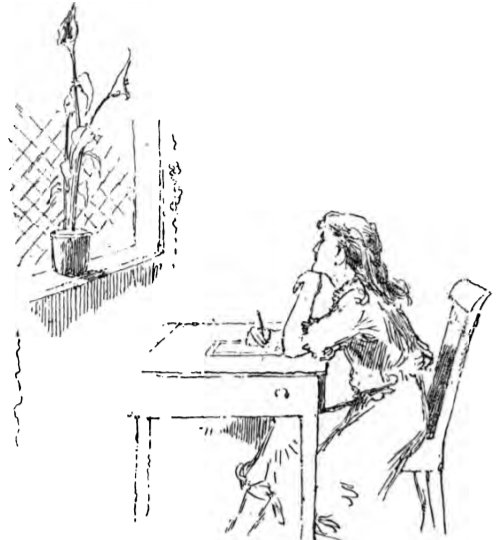 Skooro saw her looking up and began his evil work. In order to help her to do what she ought not to do he took the shape of a lily and lay on the slate very faintly, so that she had only to draw round his edges and then there was a lily drawn. Now it is not a wrong thing to draw a lily, and if Claribel had drawn it well at a proper time she would have got praise; but a good thing may become a bad thing if it is wrongly done – and so it was with Claribel’s lily.

“Did you try?” asked the Mistress.

“Yes,” she answered, feeling that she had tried for a while.

“Did you idle?” she was asked, “Did you do anything but your sum?” Then she knew that she would get into trouble for idling if she told it; and so forgetting all about the Jasper City and those who are doomed to stand without its beautiful gates, she answered that she had done nothing else but sums. The mistress took her word – for she had always been truthful – and said :

“You were puzzled, I suppose, dear child; let me help you,” and she kindly showed her how to work the sum.

As she was going back to her seat, Claribel hung her head, for she knew that she had told a lie, and although it need now never he found out, she was sorrowful, and felt as if she were standing outside the shining City. Even then if she had rushed up to the mistress and said:

“I have done wrong; but I will be a better child again,” all would have been well; but she did not, and every minute that passed made such a thing harder to do.

Soon after school was over, and Claribel went sadly home. She did not care to play, for she had told a lie, and her heart was heavy.

When bed-time came she lay down weary, but could not sleep; and she cried very bitterly, for she could not pray. She was sorry that she had told a lie, and she thought it rather hard that her sorrow was not enough to make her happy again; but her conscience said –

“Will you confess to-morrow?” But she thought that it would not be necessary, for the sin was over and she had not done harm to anyone. But all the time she knew that she was wrong. Had the mistress spoken of this, she would have said –

“It is ever thus, dear children. A sin cannot be wiped away till the shame comes first; for without the shame and the acknowledgment of guilt the heart cannot be cleansed from the sin.”

At last Claribel sobbed herself to sleep.

Then when she slept, the Child Angel stole into the room and passed over her eyelids, so that even in her sleep she saw the beautiful light, and she thought of the City like a jasper stone, clear as crystal, with its twelve gates with names written thereon. She dreamed that she saw the Angel with the golden reed measuring the city, and Claribel was so happy that she forgot all about her sin. The Child Angel knew all her thoughts, and he grew less and less till his light all died away; and to Claribel in her dream all seemed to grow dark, and she knew that she was standing without the gate of the Beautiful City. The Angel, who held the measuring reed of gold, stood on the battlements of the city, and in a terrible voice said – 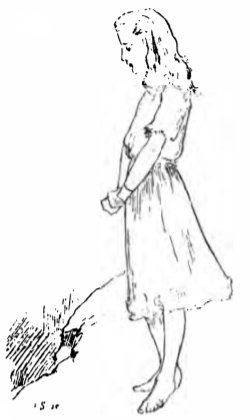 “Claribel, stand thou without; thou makest and lovest a lie.”

“Then why not confess thy fault?”

Claribel was silent; but she would not confess her sin, for her heart was hard, and the Angel lifted the golden reed, and lo! it blossomed a beautiful lily. Then the Angel said –

“The lilies grow only for the pure, who live within the city; thou must stand without among the liars.”

Claribel saw the jasper walls before her towering up and up, and she knew that they were an eternal barrier to her, and that she must ever stand without the Beautiful City; and in the anguish and horror she felt how deep was her sin, and longed to confess it.

Skooro saw that she was repenting, for he, too, could see into her thoughts, and with the darkness of his presence he tried to blot out the whole dream of the Beautiful City.

But the Child Angel crept into her heart and made it light, and the seed of repentance grew and blossomed.

Claribel woke early, and rose and went and told her mistress of her sin, and was happy once more.

All her life long she loved the lilies; for she thought of her lie and of her repentance for it, and that the lilies grow within the Jasper City, which is for the pure alone.

Under the Sunset and Other Stories