Bram Stoker – The Dualitists or The Death Doom 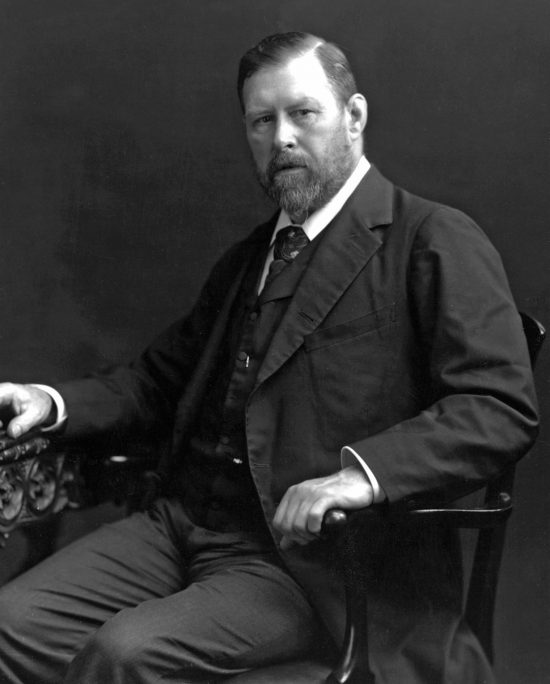 There was joy in the house of Bubb.

For ten long years had Ephraim and Sophonisba Bubb mourned in vain the loneliness of their life. Unavailingly had they gazed into the emporia of baby-linen, and fixed their searching glances on the basket-makers’ warehouses where the cradles hung in tempting rows. In vain had they prayed, and sighed, and groaned, and wished, and waited, and wept, but never had even a ray of hope been held out by the family physician.

But now at last the wished-for moment had arrived. Month after month had flown by on leaden wings, and the destined days had slowly measured their course. The months had become weeks; the weeks had dwindled down to days; the days had been attenuated to hours; the hours had lapsed into minutes, the minutes had slowly died away, and but seconds remained.

Ephraim Bubb sat cowering on the stairs, and tried with high-strung ears to catch the strain of blissful music from the lips of his first-born. There was silence in the house–silence as of the deadly calm before the cyclone. Ah! Ephraim Bubb, little thinkest thou that another moment may for ever destroy the peaceful, happy course of thy life, and open to thy too-craving eyes the portals of that wondrous land where childhood reigns supreme, and where the tyrant infant with the wave of his tiny hand and the imperious treble of his tiny voice sentences his parent o the deadly vault beneath the castle moat. As the thought strikes thee thou becomest pale. How thou tremblest as thou findest thyself upon the brink of the abyss! Wouldst that thou could recall the past!

But hark! the die is cast for good or ill. The long years of praying and hoping have found an end at last. From the chamber within comes a sharp cry, which shortly after is repeated. Ah!

Ephraim, that cry is the feeble effort of childish lips as yet unused to the rough, worldly form of speech to frame the word ‘father’. In the glow of thy transport all doubts are forgotten; and when the doctor cometh forth as the harbinger of joy he findeth thee radiant with new-found delight.

‘My dear sir, allow me to congratulate you–to offer twofold felicitations. Mr Bubb, sir, you are the father of twins!’

Pages: 1 2 3 4 5 6 7
Leave a reply to Bram Stoker – The Dualitists or The Death Doom
Selected Authors
Popular