The Advancement of Learning

The Advancement of Learning by Francis Bacon

THE Advancement Of Learning. 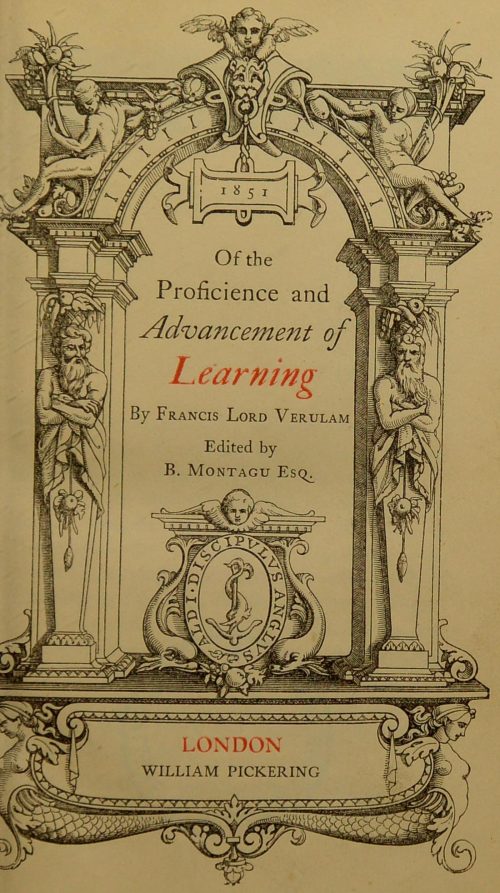 The Tvvoo Bookes of Francis Bacon. Of the proficience and aduancement of Learning, divine and humane. To the King. At London. Printed for Henrie Tomes, and are to be sould at his shop at Graies Inne Gate in Holborne. 1605.” That was the original title-page of the book now in the reader’s hand—a living book that led the way to a new world of thought. It was the book in which Bacon, early in the reign of James the First, prepared the way for a full setting forth of his New Organon, or instrument of knowledge.

The Organon of Aristotle was a set of treatises in which Aristotle had written the doctrine of propositions. Study of these treatises was a chief occupation of young men when they passed from school to college, and proceeded from Grammar to Logic, the second of the Seven Sciences. Francis Bacon as a youth of sixteen, at Trinity College, Cambridge, felt the unfruitfulness of this method of search after truth. He was the son of Sir Nicholas Bacon, Queen Elizabeth’s Lord Keeper, and was born at York House, in the Strand, on the 22nd of January, 1561. His mother was the Lord Keeper’s second wife, one of two sisters, of whom the other married Sir William Cecil, afterwards Lord Burleigh. Sir Nicholas Bacon had six children by his former marriage, and by his second wife two sons, Antony and Francis, of whom Antony was about two years the elder. The family home was at York Place, and at Gorhambury, near St. Albans, from which town, in its ancient and its modern style, Bacon afterwards took his titles of Verulam and St. Albans.

Antony and Francis Bacon went together to Trinity College, Cambridge, when Antony was fourteen years old and Francis twelve. Francis remained at Cambridge only until his sixteenth year; and Dr. Rawley, his chaplain in after-years, reports of him that “whilst he was commorant in the University, about sixteen years of age (as his lordship hath been pleased to impart unto myself), he first fell into dislike of the philosophy of Aristotle; not for the worthlessness of the author, to whom he would ascribe all high attributes, but for the unfruitfulness of the way, being a philosophy (as his lordship used to say) only strong for disputatious and contentions, but barren of the production of works for the benefit of the life of man; in which mind he continued to his dying day.” Bacon was sent as a youth of sixteen to Paris with the ambassador Sir Amyas Paulet, to begin his training for the public service; but his father’s death, in February, 1579, before he had completed the provision he was making for his youngest children, obliged him to return to London, and, at the age of eighteen, to settle down at Gray’s Inn to the study of law as a profession. He was admitted to the outer bar in June, 1582, and about that time, at the age of twenty-one, wrote a sketch of his conception of a New Organon that should lead man to more fruitful knowledge, in a little Latin tract, which he called “Temporis Partus Maximus” (“The Greatest Birth of Time”).

In November, 1584, Bacon took his seat in the House of Commons as member for Melcombe Regis, in Dorsetshire. In October, 1586, he sat for Taunton. He was member afterwards for Liverpool; and he was one of those who petitioned for the speedy execution of Mary Queen of Scots. In October, 1589, he obtained the reversion of the office of Clerk of the Council in the Star Chamber, which was worth £1,600 or £2,000 a year; but for the succession to this office he had to wait until 1608. It had not yet fallen to him when he wrote his “Two Books of the Advancement of Learning.” In the Parliament that met in February, 1593, Bacon sat as member for Middlesex. He raised difficulties of procedure in the way of the grant of a treble subsidy, by just objection to the joining of the Lords with the Commons in a money grant, and a desire to extend the time allowed for payment from three years to six; it was, in fact, extended to four years. The Queen was offended. Francis Bacon and his brother Antony had attached themselves to the young Earl of Essex, who was their friend and patron. The office of Attorney-General became vacant. Essex asked the Queen to appoint Francis Bacon. The Queen gave the office to Sir Edward Coke, who was already Solicitor-General, and by nine years Bacon’s senior. The office of Solicitor-General thus became vacant, and that was sought for Francis Bacon. The Queen, after delay and hesitation, gave it, in November, 1595, to Serjeant Fleming. The Earl of Essex consoled his friend by giving him “a piece of land”—Twickenham Park—which Bacon afterwards sold for £1,800—equal, say, to £12,000 in present buying power. In 1597 Bacon was returned to Parliament as member for Ipswich, and in that year he was hoping to marry the rich widow of Sir William Hatton, Essex helping; but the lady married, in the next year, Sir Edward Coke. It was in 1597 that Bacon published the First Edition of his Essays. That was a little book containing only ten essays in English, with twelve “Meditationes Sacræ,” which were essays in Latin on religious subjects. From 1597 onward to the end of his life, Bacon’s Essays were subject to continuous addition and revision. The author’s Second Edition, in which the number of the Essays was increased from ten to thirty-eight, did not appear until November or December, 1612, seven years later than these two books on the “Advancement of Learning;” and the final edition of the Essays, in which their number was increased from thirty-eight to fifty-eight, appeared only in 1625; and Bacon died on the 9th of April, 1626. The edition of the Essays published in 1597, under Elizabeth, marked only the beginning of a course of thought that afterwards flowed in one stream with his teachings in philosophy.

In February, 1601, there was the rebellion of Essex. Francis Bacon had separated himself from his patron after giving him advice that was disregarded. Bacon, now Queen’s Counsel, not only appeared against his old friend, but with excess of zeal, by which, perhaps, he hoped to win back the Queen’s favour, he twice obtruded violent attacks upon Essex when he was not called upon to speak. On the 25th of February, 1601, Essex was beheaded. The genius of Bacon was next employed to justify that act by “A Declaration of the Practices and Treasons attempted and committed by Robert late Earle of Essex and his Complices.” But James of Scotland, on whose behalf Essex had intervened, came to the throne by the death of Elizabeth on the 24th of March, 1603. Bacon was among the crowd of men who were made knights by James I., and he had to justify himself under the new order of things by writing “Sir Francis Bacon his Apologie in certain Imputations concerning the late Earle of Essex.” He was returned to the first Parliament of James I. by Ipswich and St. Albans, and he was confirmed in his office of King’s Counsel in August, 1604; but he was not appointed to the office of Solicitor-General when it became vacant in that year.

That was the position of Francis Bacon in 1605, when he published this work, where in his First Book he pointed out the discredits of learning from human defects of the learned, and emptiness of many of the studies chosen, or the way of dealing with them. This came, he said, especially by the mistaking or misplacing of the last or furthest end of knowledge, as if there were sought in it “a couch whereupon to rest a searching and restless spirit; or a terrace for a wandering and variable mind to walk up and down with a fair prospect; or a tower of state for a proud mind to raise itself upon; or a fort or commanding ground for strife and contention; or a shop for profit or sale; and not a rich storehouse for the glory of the Creator and the relief of man’s estate.” The rest of the First Book was given to an argument upon the Dignity of Learning; and the Second Book, on the Advancement of Learning, is, as Bacon himself described it, “a general and faithful perambulation of learning, with an inquiry what parts thereof lie fresh and waste, and not improved and converted by the industry of man; to the end that such a plot made and recorded to memory may both minister light to any public designation and also serve to excite voluntary endeavours.” Bacon makes, by a sort of exhaustive analysis, a ground-plan of all subjects of study, as an intellectual map, helping the right inquirer in his search for the right path. The right path is that by which he has the best chance of adding to the stock of knowledge in the world something worth labouring for; and the true worth is in labour for “the glory of the Creator and the relief of man’s estate.”

Leave a reply to The Advancement of Learning
Selected Authors
Popular