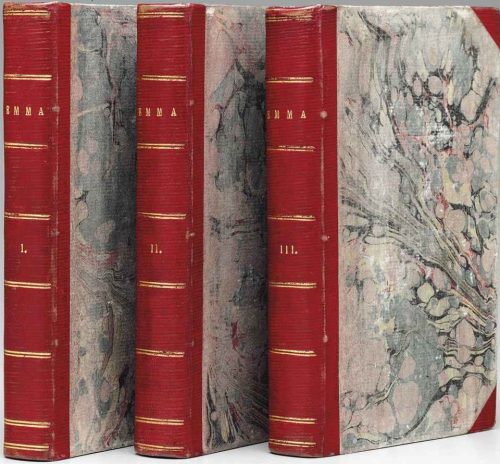 A very little quiet reflection was enough to satisfy Emma as to the nature of her agitation on hearing this news of Frank Churchill. She was soon convinced that it was not for herself she was feeling at all apprehensive or embarrassed; it was for him. Her own attachment had really subsided into a mere nothing; it was not worth thinking of;—but if he, who had undoubtedly been always so much the most in love of the two, were to be returning with the same warmth of sentiment which he had taken away, it would be very distressing. If a separation of two months should not have cooled him, there were dangers and evils before her:—caution for him and for herself would be necessary. She did not mean to have her own affections entangled again, and it would be incumbent on her to avoid any encouragement of his.

She wished she might be able to keep him from an absolute declaration. That would be so very painful a conclusion of their present acquaintance! and yet, she could not help rather anticipating something decisive. She felt as if the spring would not pass without bringing a crisis, an event, a something to alter her present composed and tranquil state.

It was not very long, though rather longer than Mr. Weston had foreseen, before she had the power of forming some opinion of Frank Churchill’s feelings. The Enscombe family were not in town quite so soon as had been imagined, but he was at Highbury very soon afterwards. He rode down for a couple of hours; he could not yet do more; but as he came from Randalls immediately to Hartfield, she could then exercise all her quick observation, and speedily determine how he was influenced, and how she must act. They met with the utmost friendliness. There could be no doubt of his great pleasure in seeing her. But she had an almost instant doubt of his caring for her as he had done, of his feeling the same tenderness in the same degree. She watched him well. It was a clear thing he was less in love than he had been. Absence, with the conviction probably of her indifference, had produced this very natural and very desirable effect.

He was in high spirits; as ready to talk and laugh as ever, and seemed delighted to speak of his former visit, and recur to old stories: and he was not without agitation. It was not in his calmness that she read his comparative difference. He was not calm; his spirits were evidently fluttered; there was restlessness about him. Lively as he was, it seemed a liveliness that did not satisfy himself; but what decided her belief on the subject, was his staying only a quarter of an hour, and hurrying away to make other calls in Highbury. “He had seen a group of old acquaintance in the street as he passed—he had not stopped, he would not stop for more than a word—but he had the vanity to think they would be disappointed if he did not call, and much as he wished to stay longer at Hartfield, he must hurry off.” She had no doubt as to his being less in love—but neither his agitated spirits, nor his hurrying away, seemed like a perfect cure; and she was rather inclined to think it implied a dread of her returning power, and a discreet resolution of not trusting himself with her long.

This was the only visit from Frank Churchill in the course of ten days. He was often hoping, intending to come—but was always prevented. His aunt could not bear to have him leave her. Such was his own account at Randall’s. If he were quite sincere, if he really tried to come, it was to be inferred that Mrs. Churchill’s removal to London had been of no service to the wilful or nervous part of her disorder. That she was really ill was very certain; he had declared himself convinced of it, at Randalls. Though much might be fancy, he could not doubt, when he looked back, that she was in a weaker state of health than she had been half a year ago. He did not believe it to proceed from any thing that care and medicine might not remove, or at least that she might not have many years of existence before her; but he could not be prevailed on, by all his father’s doubts, to say that her complaints were merely imaginary, or that she was as strong as ever.

It soon appeared that London was not the place for her. She could not endure its noise. Her nerves were under continual irritation and suffering; and by the ten days’ end, her nephew’s letter to Randalls communicated a change of plan. They were going to remove immediately to Richmond. Mrs. Churchill had been recommended to the medical skill of an eminent person there, and had otherwise a fancy for the place. A ready-furnished house in a favourite spot was engaged, and much benefit expected from the change.

Emma heard that Frank wrote in the highest spirits of this arrangement, and seemed most fully to appreciate the blessing of having two months before him of such near neighbourhood to many dear friends—for the house was taken for May and June. She was told that now he wrote with the greatest confidence of being often with them, almost as often as he could even wish.

Emma saw how Mr. Weston understood these joyous prospects. He was considering her as the source of all the happiness they offered. She hoped it was not so. Two months must bring it to the proof.

Mr. Weston’s own happiness was indisputable. He was quite delighted. It was the very circumstance he could have wished for. Now, it would be really having Frank in their neighbourhood. What were nine miles to a young man?—An hour’s ride. He would be always coming over. The difference in that respect of Richmond and London was enough to make the whole difference of seeing him always and seeing him never. Sixteen miles—nay, eighteen—it must be full eighteen to Manchester-street—was a serious obstacle. Were he ever able to get away, the day would be spent in coming and returning. There was no comfort in having him in London; he might as well be at Enscombe; but Richmond was the very distance for easy intercourse. Better than nearer!

One good thing was immediately brought to a certainty by this removal,—the ball at the Crown. It had not been forgotten before, but it had been soon acknowledged vain to attempt to fix a day. Now, however, it was absolutely to be; every preparation was resumed, and very soon after the Churchills had removed to Richmond, a few lines from Frank, to say that his aunt felt already much better for the change, and that he had no doubt of being able to join them for twenty-four hours at any given time, induced them to name as early a day as possible.

Mr. Weston’s ball was to be a real thing. A very few to-morrows stood between the young people of Highbury and happiness.

Mr. Woodhouse was resigned. The time of year lightened the evil to him. May was better for every thing than February. Mrs. Bates was engaged to spend the evening at Hartfield, James had due notice, and he sanguinely hoped that neither dear little Henry nor dear little John would have any thing the matter with them, while dear Emma were gone.