All the old editions of Marlowe’s translation of the Amores are undated, and bear the imprint Middleburgh (in various spellings).

It is probable that the copy which Mr. Charles Edmonds discovered at Lamport Hall, Northamptonshire (the seat of Sir Charles Isham, Bart.), is the earliest of extant editions.

The title-page of this edition is—Epigrammes and Elegies By I. D. and C. M. At Middleborugh 12mo. After the title-page come the Epigrammata, which are signed at the end “I. D.” (the initials of Sir John Davies).

Following the Epigrammata is a copy of verses headed Ignoto, and then comes a second title-page—Certaine of Ovid’s Elegies. By C. Marlowe. At Middleborough.

In his preface to a facsimile reprint of the little volume, Mr. Edmonds states his conviction that this edition, notwithstanding the imprint Middleborough, was issued at London from the press of W. Jaggard, who in 1599 printed the Passionate Pilgrime.

He grounds his opinion not only on the character of the type and of the misprints, but on the fact that there would be no need for the book to be printed abroad in the first instance.

It was not (he thinks) until after June 1599—when (with other books) it was condemned by Archbishop Whitgift to be burnt—that recourse was had to the expedient of reprinting it at Middleburgh. In the notes I refer to this edition as Isham copy.

The next edition, which has the same title-pages as the Isham copy—Epigrammes and Elegies by I. D. and C. M. at Middleborugh, 12mo—was certainly, to judge from its general appearance, printed abroad, and by foreigners. The text agrees in the main with that of the Isham copy, but the corruptions are more numerous. I have followed Dyce in referring to this edition as Ed. A.

The Isham copy and Ed. A contain only a portion of the Elegies. The complete translation appeared in All Ovid’s Elegies: 3 Bookes. By C. M. Epigrams by I. D. At Middleborugh, 12mo. (Ed. B); and in another edition with the same title-page (Ed. C).

The readings of Ed. C. I have occasionally borrowed from Dyce. It is supposed that the book “continued to be printed with Middleburgh on the title, and without date, as late as 1640” (Hazlitt). 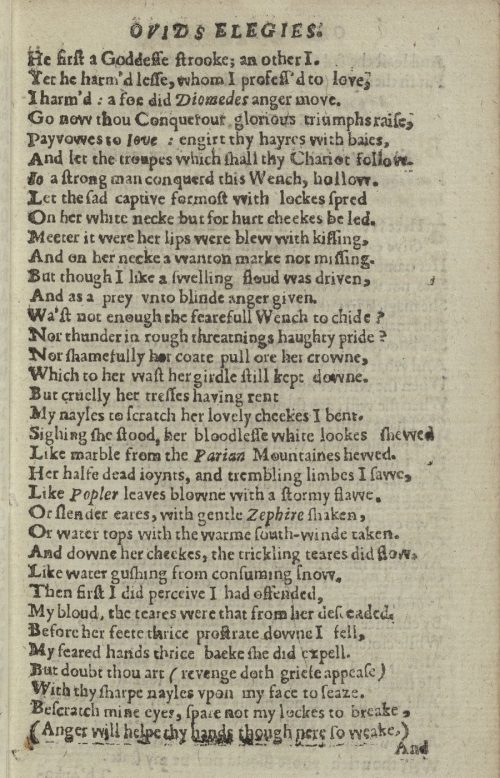