Marlowe, Christopher (1564-1593), Born the same year as Shakespeare, Christopher Marlowe was to become the first great poet of the theatre’s second great age.

His life, much like the lives of his characters, would be short and violent. 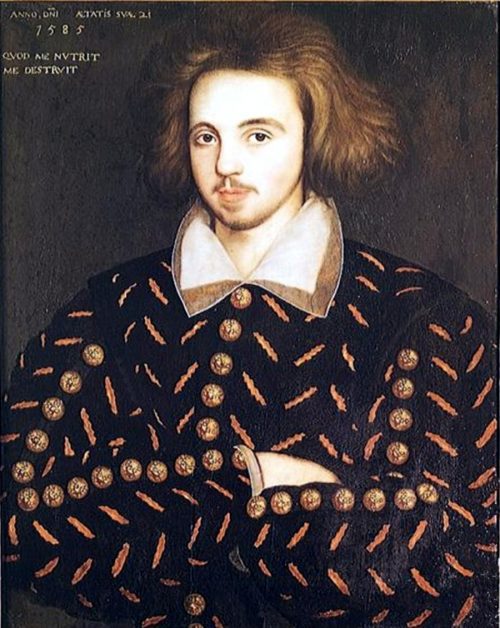 The son of a shoemaker, Marlowe attended King’s School, Canterbury and Corpus Christi College where he received his Bachelor of Arts in 1584 and his Masters degree three years later. According to university records, Marlowe disappeared frequently during his last years at school, exceeding the number of absences permitted him by statute and putting his degree in jeopardy.

Apparently, much of this time was spent in Rheims among the Catholics who were plotting against Queen Elizabeth’s protestant regime. Because of his absences and the fact that he refused to take holy orders, the university refused, for a time, to confer his degree, but the authorities intervened, and the degree was eventually granted.

Although we cannot be certain, Marlowe may have fought in the wars in the Low Country after graduation. What we can be certain of is that he settled in London in 1587 and began his career as a playwright, although he may still have been in the employ of the secret service as well.

The young poet plunged himself into a social circle that included such colorful literary figures as Sir Phillip Sidney and Sir Walter Raleigh. He shared a room with fellow playwright Thomas Kyd and was often seen frequenting the taverns of London with the likes of Robert Greene and Thomas Nashe. His magnificent appearance, impulsiveness, and bejeweled costumes soon became the talk of the town.

Primed by this new-found intellectual stimulation, Marlowe soon wrote Tamburlaine, the first notable English play in blank verse and a worthy addition to the Classic Literature Library. Elizabethan drama had reached the foothills and was beginning its final ascent when Marlowe came onto the scene. All that was needed was a bold leap such as no one had yet dared or been able to make–and Marlowe was determined to make that leap.

He had the advantage of having his plays presented by the Lord Admiral’s company. While his contemporaries were watching their work performed by church boys, Marlowe saw his dramas staged by full-chested men such as the seven-foot-tall, majestic Edward Alleyn.

No playwright had hitherto invoked the world, the flesh, and the devil so magnificently in plays such as Dr. Faustus, The Jew of Malta, and Edward II. The young poet, however, had neither wealth nor position, and the disparity between his dreams and the reality of his situation began to weigh upon him. He grew more and more restless and irritable until even his friends began to lose patience with him.

In 1593, after pointing out what he considered to be inconsistencies in the Bible, Marlowe fell under suspicion of heresy. His roommate, Thomas Kyd, was tortured into giving evidence against him, but before he could be brought before the Privy Council, the twenty-nine-year-old poet was found dead at Dame Eleanore Bull’s tavern in Deptford. On May 30, 1593, he had gone to the tavern to have dinner with some friends.

According to witnesses, there was a quarrel over the bill and Marlowe drew his dagger on another man who, defending himself, drove the dagger back into the young poet’s eye, mortally wounding him. There is reason to believe, however, that Marlowe may have been deliberately provoked and murdered in order to prevent his arrest. Had he been brought before the Privy Council, he might have implicated men of importance such as Raleigh.

Christopher Marlowe’s contribution to the drama, however, was complete. He had returned high poetry to its rightful place on the stage and left us characters as fiery and passionate as their creator, preparing the way for a poet even greater than himself, William Shakespeare.