KYD, THOMAS (1558-1595), Born in London in 1558, the son of Francis Kyd, a scrivener. He was educated at the Merchant Tailors’ School, of which Richard Mulcaster, was headmaster. 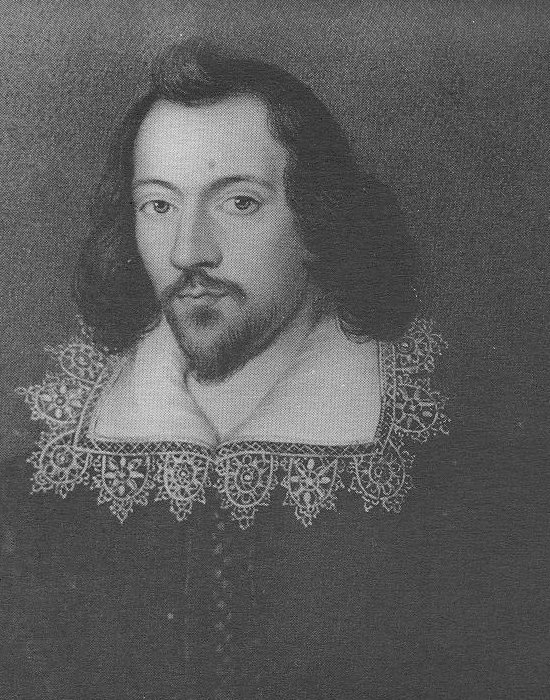 Probably he followed his father’s calling for a while, but little or nothing more is known of him until he reached his thirties. He seems to have had some acquaintance with French, Italian, Spanish, and Latin, and to have done hack work in translating and in pamphleteering. Certainly with his Spanish Tragedy at least, he had a part in the outburst of popular tragedy around 1590.

It has been supposed that he afterward capitalized on the popularity of this play by writing what might be called a first part, though the extant First Part of Jeronimo (printed in 1605) is probably by another hand. Soliman and Perseda is usually assigned to him on the basis of style and of the fact that it has the same plot as the play produced by Hieronimo in The Spanish Tragedy. The claim that he wrote Arden of Feversham is discussed in connection with that play.

Kyd is also credited with an early version of Hamlet, now lost, especially by those who regard as aimed at him an allusion to one who “will afford you whole Hamlets, I should say handfuls of tragical speeches,” in Nashe’s preface to Greene’s Menaphon. Nashe’s satire in the same connection on the scrivener born who leaves his trade to write tragedies plundered from Seneca is usually accepted as inspired by the success of Kyd’s plays.

At any rate Nashe here and Greene in his Groatsworth of Wit show resentment at the rise of dramatists without classical training who were proving more effective than the University Wits. Kyd was connected with the coterie around the Countess of Pembroke who were interested in developing a literary tragedy, and he translated from Robert Garnier, called the “French Seneca,” the tragedy of Cornelia, printed in 1594–the only extant play to bear Kyd’s name on the title-page.

Arrested in 1593 on suspicion of having posted libels on foreigners, he was found in possession of papers considered heretical or atheistic. He was released on his testimony that the papers had been left among his effects by Marlowe in 1591, when the two of them, in the service of an unidentified lord, had used the same room. Kyd died in 1594.

The authorship of The Spanish Tragedy is known only from a chance reference in Thomas Heywood’s Apology for Actors in 1612 and is a worthy addition to the Classic Literature Library. The date assigned to the play varies from 1582 to 1589, with the evidence in favor of the latter date, when the vogue of revenge tragedies–most of them now lost–seems to have begun. The known history of the tragedy opens with Henslowe’s record of frequent performances in 1592. License to print was granted in October of that year.

What is apparently the earliest extant edition is undated; the earliest with date is that of 1594. Both, however, refer to a “first impression,” now lost. In 1597 Henslowe records a number of performances of the play as new, perhaps on account of revision. In September, 1601, and June, 1602, he paid Jonson for additions to “Jeronimo,” possibly in competition with the closely related Hamlet, which Shakespeare was reviving for the Chamberlain’s players at the same time, and with several new revenge plays of other companies modeled on these two.

In 1602 an edition appeared with “new additions,” which develop certain impassioned parts, and which have been assigned to Jonson on the basis of Henslowe’s payments. The amounts paid would suggest a more thorough revision, however, and the style of the additions is regarded as against Jonson’s authorship, though no real evidence has been adduced in favor of anyone else. The play had an extraordinary popularity. It ran into many editions, at least one of them pirated, was freely imitated, was the subject of numerous allusions, especially by way of stage parody and satire, and finally made its way to Germany.

The romantic plot, for which no source has been traced, is strongly colored by the influence of Senecan tragedy–in the chorus, the ghost, the sententious and balanced speeches, the declamation, and the melodramatic treatment of character. The style differs from Marlowe’s, with its “high astounding terms,” in the emphasis on conceit and on elaborate rhetorical devices of repetition and balance.