Beyond The City by Arthur Conan Doyle 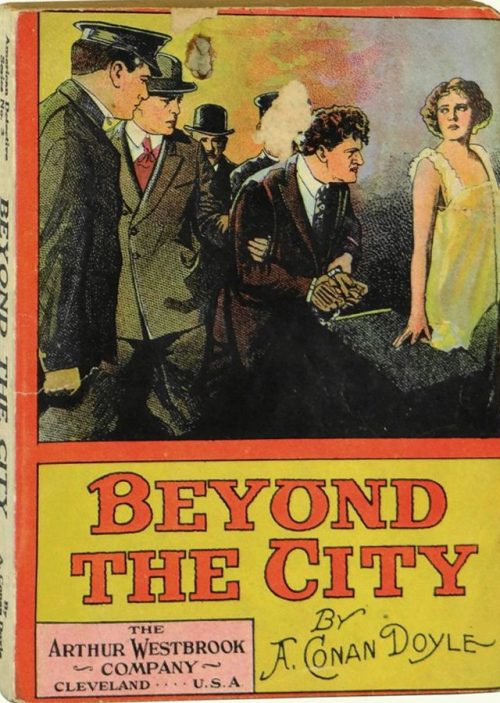 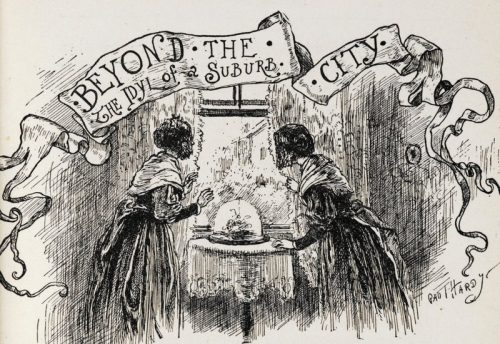 Beyond The City Contents

Beyond The City Chapter I. The New-Comers

“If you please, mum,” said the voice of a domestic from somewhere round the angle of the door, “number three is moving in.”

Two little old ladies, who were sitting at either side of a table, sprang to their feet with ejaculations of interest, and rushed to the window of the sitting-room.

“Take care, Monica dear,” said one, shrouding herself in the lace curtain; “don’t let them see us.

“No, no, Bertha. We must not give them reason to say that their neighbors are inquisitive. But I think that we are safe if we stand like this.”

The open window looked out upon a sloping lawn, well trimmed and pleasant, with fuzzy rosebushes and a star-shaped bed of sweet-william. It was bounded by a low wooden fence, which screened it off from a broad, modern, new metaled road. At the other side of this road were three large detached deep-bodied villas with peaky eaves and small wooden balconies, each standing in its own little square of grass and of flowers. All three were equally new, but numbers one and two were curtained and sedate, with a human, sociable look to them; while number three, with yawning door and unkempt garden, had apparently only just received its furniture and made itself ready for its occupants. A four-wheeler had driven up to the gate, and it was at this that the old ladies, peeping out bird-like from behind their curtains, directed an eager and questioning gaze.

The cabman had descended, and the passengers within were handing out the articles which they desired him to carry up to the house. He stood red-faced and blinking, with his crooked arms outstretched, while a male hand, protruding from the window, kept piling up upon him a series of articles the sight of which filled the curious old ladies with bewilderment.

“My goodness me!” cried Monica, the smaller, the drier, and the more wizened of the pair. “What do you call that, Bertha? It looks to me like four batter puddings.”

“Those are what young men box each other with,” said Bertha, with a conscious air of superior worldly knowledge.

Two great bottle-shaped pieces of yellow shining wood had been heaped upon the cabman.

“Oh, I don’t know what those are,” confessed Bertha. Indian clubs had never before obtruded themselves upon her peaceful and very feminine existence.

These mysterious articles were followed, however, by others which were more within their range of comprehension—by a pair of dumb-bells, a purple cricket-bag, a set of golf clubs, and a tennis racket. Finally, when the cabman, all top-heavy and bristling, had staggered off up the garden path, there emerged in a very leisurely way from the cab a big, powerfully built young man, with a bull pup under one arm and a pink sporting paper in his hand. The paper he crammed into the pocket of his light yellow dust-coat, and extended his hand as if to assist some one else from the vehicle. To the surprise of the two old ladies, however, the only thing which his open palm received was a violent slap, and a tall lady bounded unassisted out of the cab. With a regal wave she motioned the young man towards the door, and then with one hand upon her hip she stood in a careless, lounging attitude by the gate, kicking her toe against the wall and listlessly awaiting the return of the driver.

As she turned slowly round, and the sunshine struck upon her face, the two watchers were amazed to see that this very active and energetic lady was far from being in her first youth, so far that she had certainly come of age again since she first passed that landmark in life’s journey. Her finely chiseled, clean-cut face, with something red Indian about the firm mouth and strongly marked cheek bones, showed even at that distance traces of the friction of the passing years. And yet she was very handsome. Her features were as firm in repose as those of a Greek bust, and her great dark eyes were arched over by two brows so black, so thick, and so delicately curved, that the eye turned away from the harsher details of the face to marvel at their grace and strength. Her figure, too, was straight as a dart, a little portly, perhaps, but curving into magnificent outlines, which were half accentuated by the strange costume which she wore. Her hair, black but plentifully shot with grey, was brushed plainly back from her high forehead, and was gathered under a small round felt hat, like that of a man, with one sprig of feather in the band as a concession to her sex. A double-breasted jacket of some dark frieze-like material fitted closely to her figure, while her straight blue skirt, untrimmed and ungathered, was cut so short that the lower curve of her finely-turned legs was plainly visible beneath it, terminating in a pair of broad, flat, low-heeled and square-toed shoes. Such was the lady who lounged at the gate of number three, under the curious eyes of her two opposite neighbors.

But if her conduct and appearance had already somewhat jarred upon their limited and precise sense of the fitness of things, what were they to think of the next little act in this tableau vivant? The cabman, red and heavy-jowled, had come back from his labors, and held out his hand for his fare. The lady passed him a coin, there was a moment of mumbling and gesticulating, and suddenly she had him with both hands by the red cravat which girt his neck, and was shaking him as a terrier would a rat. Right across the pavement she thrust him, and, pushing him up against the wheel, she banged his head three several times against the side of his own vehicle.

“Can I be of any use to you, aunt?” asked the large youth, framing himself in the open doorway.

“Not the slightest,” panted the enraged lady. “There, you low blackguard, that will teach you to be impertinent to a lady.”

The cabman looked helplessly about him with a bewildered, questioning gaze, as one to whom alone of all men this unheard-of and extraordinary thing had happened. Then, rubbing his head, he mounted slowly on to the box and drove away with an uptossed hand appealing to the universe. The lady smoothed down her dress, pushed back her hair under her little felt hat, and strode in through the hall-door, which was closed behind her. As with a whisk her short skirts vanished into the darkness, the two spectators—Miss Bertha and Miss Monica Williams—sat looking at each other in speechless amazement. For fifty years they had peeped through that little window and across that trim garden, but never yet had such a sight as this come to confound them.

“I wish,” said Monica at last, “that we had kept the field.”

“I am sure I wish we had,” answered her sister.

Beyond The City Chapter II. Breaking The Ice