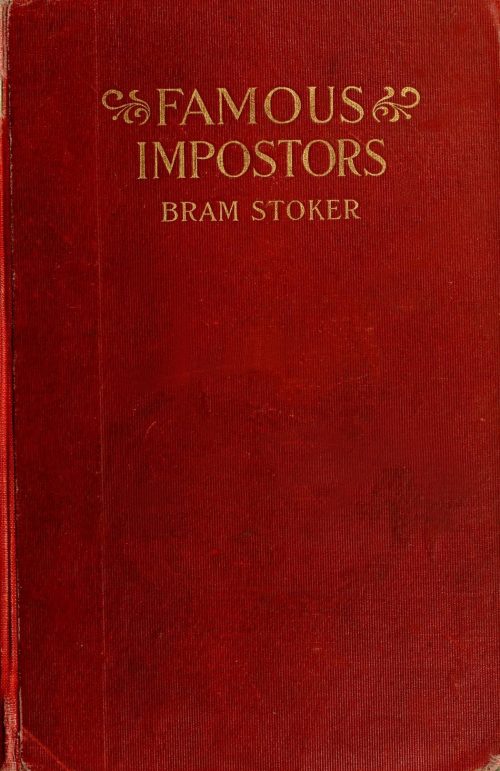 The subject of imposture is always an interesting one, and impostors in one shape or another are likely to flourish as long as human nature remains what it is, and society shows itself ready to be gulled. The histories of famous cases of imposture in this book have been grouped together to show that the art has been practised in many forms—impersonators, pretenders, swindlers, and humbugs of all kinds; those who have masqueraded in order to acquire wealth, position, or fame, and those who have done so merely for the love of the art. So numerous are instances, indeed, that the book cannot profess to exhaust a theme which might easily fill a dozen volumes; its purpose is simply to collect and record a number of the best known instances. The author, nevertheless, whose largest experience has lain in the field of fiction, has aimed at dealing with his material as with the material for a novel, except that all the facts given are real and authentic. He has made no attempt to treat the subject ethically; yet from a study of these impostors, the objects they had in view, the means they adopted, the risks they ran, and the punishments which attended exposure, any reader can draw his own conclusions.

Impostors of royalty are placed first on account of the fascinating glamour of the throne which has allured so many to the attempt. Perkin Warbeck began a life of royal imposture at the age of seventeen and yet got an army round him and dared to make war on Harry Hotspur before ending his short and stormy life on the gallows. With a crown for stake, it is not surprising that men have been found willing to run even such risks as those taken by the impostors of Sebastian of Portugal and Louis XVII of France. That imposture, even if unsuccessful, may be very difficult to detect, is shown in the cases of Princess Olive and Cagliostro, and in those of Hannah Snell, Mary East, and the many women who in military and naval, as well as in civil, life assumed and maintained even in the din of battle the simulation of men.

One of the most extraordinary and notorious impostures ever known was that of Arthur Orton, the Tichborne Claimant, whose ultimate exposure necessitated the employment, at great public expense of time and money, of the best judicial and forensic wits in a legal process of unprecedented length.

The belief in witches, though not extinct in our country even to-day, affords examples of the converse of imposture, for in the majority of cases it was the superstitions of society which attributed powers of evil to innocent persons whose subsequent mock-trials and butchery made a public holiday for their so-called judges.

The long-continued doubt as to the true sex of the Chevalier D’Eon shows how a belief, no matter how groundless, may persist. Many cases of recent years may also be called in witness as to the initial credulity of the public, and to show how obstinacy maintains a belief so begun. The Humbert case—too fresh in the public memory to demand treatment here—the Lemoine case, and the long roll of other fraudulent efforts to turn the credulity of others to private gain, show how widespread is the criminal net, and how daring and persevering are its manipulators.

The portion of the book which deals with the tradition of the “Bisley Boy” has had, as it demanded, more full and detailed treatment than any other one subject in the volume. Needless to say, the author was at first glance inclined to put the whole story aside as almost unworthy of serious attention, or as one of those fanciful matters which imagination has elaborated out of the records of the past. The work which he had undertaken had, however, to be done, and almost from the very start of earnest enquiry it became manifest that here was a subject which could not be altogether put aside or made light of. There were too many circumstances—matters of exact record, striking in themselves and full of some strange mystery, all pointing to a conclusion which one almost feared to grasp as a possibility—to allow the question to be relegated to the region of accepted myth. A little preliminary work amongst books and maps seemed to indicate that so far from the matter, vague and inchoate as it was, being chimerical, it was one for the most patient examination. It looked, indeed, as if those concerned in making public the local tradition, which had been buried or kept in hiding somewhere for three centuries, were on the verge of a discovery of more than national importance. Accordingly, the author, with the aid of some friends at Bisley and its neighbourhood, went over the ground, and, using his eyes and ears, came to his own conclusions. Further study being thus necessitated, the subject seemed to open out in a natural way. One after another the initial difficulties appeared to find their own solutions and to vanish; a more searching investigation of the time and circumstances showed that there was little if any difficulty in the way of the story being true in essence if not in detail. Then, as point after point arising from others already examined, assisted the story, probability began to take the place of possibility; until the whole gradually took shape as a chain, link resting in the strength of link and forming a cohesive whole. That this story impugns the identity—and more than the identity—of Queen Elizabeth, one of the most famous and glorious rulers whom the world has seen, and hints at an explanation of circumstances in the life of that monarch which have long puzzled historians, will entitle it to the most serious consideration. In short, if it be true, its investigation will tend to disclose the greatest imposture known to history; and to this end no honest means should be neglected.