The First Book of Lucan Translated

The First Book of Lucan Translated by Christopher Marlowe

THE FIRST BOOK OF LUCAN.

Lucans First Booke Translated Line for Line, By Chr. Marlow. At London, the Flower de Luce in Paules Churchyard, 1600, 4to. 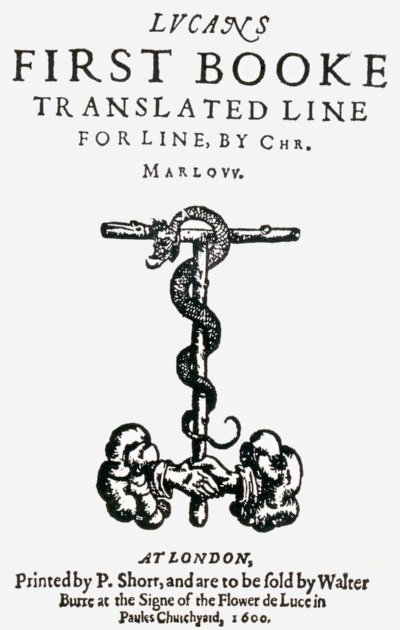 TO HIS KIND AND TRUE FRIEND, EDWARD BLUNT.[576]

Blunt,[577] I propose to be blunt with you, and, out of my dulness, to encounter you with a Dedication in memory of that pure elemental wit, Chr. Marlowe, whose ghost or genius is to be seen walk the Churchyard,[578] in, at the least, three or four sheets. Methinks you should presently look wild now, and grow humorously frantic upon the taste of it. Well, lest you should, let me tell you, this spirit was sometime a familiar of your own, Lucan’s First Book translated; which, in regard of your old right in it, I have raised in the circle of your patronage. But stay now, Edward: if I mistake not, you are to accommodate yourself with some few instructions, touching the property of a patron, that you are not yet possessed of; and to study them for your better grace, as our gallants do fashions. First, you must be proud, and think you have merit enough in you, though you are ne’er so empty; then, when I bring you the book, take physic, and keep state; assign me a time by your man to come again; and, afore the day, be sure to have changed your lodging; in the meantime sleep little, and sweat with the invention of some pitiful dry jest or two, which you may happen to utter with some little, or not at all, marking of your friends, when you have found a place for them to come in at; or, if by chance something has dropped from you worth the taking up, weary all that come to you with the often repetition of it; censure, scornfully enough, and somewhat like a traveller; commend nothing, lest you discredit your (that which you would seem to have) judgment. These things, if you can mould yourself to them, Ned, I make no question that they will not become you. One special virtue in our patrons of these days I have promised myself you shall fit excellently, which is, to give nothing; yes, thy love I will challenge as my peculiar object, both in this, and, I hope, many more succeeding offices. Farewell: I affect not the world should measure my thoughts to thee by a scale of this nature: leave to think good of me when I fall from thee.
Thine in all rights of perfect friendship,
THOMAS THORPE.

THE FIRST BOOK OF LUCAN.

THE FIRST BOOK OF LUCAN FOOTNOTES:

[589] “So old ed. in some copies which had been corrected at press; other copies ‘Aezean.'”—Dyce.

[592] As the line stands we must take “nod” and “fall” transitively (“though every blast make it nod and seem to make it fall”). The original has “At quamvis primo nutet casura sub Euro.”

[601] Marlowe omits to translate the words that follow in the original:—

[604] Old ed. “Eleius.” It is hardly possible to suppose (as Dyce suggests) that Marlowe took the adjective “Eleus” for a substantive.

[605] A mistranslation of “carcere clauso.” (“Carcer” is the barrier or starting-place in the circus.)

[606] “Immineat foribus.” “Souse” is a north-country word meaning to bang or dash. It is also applied to the swooping-down of a hawk.

[613] A free translation of the frigid original—

[624] Marlowe has converted the name of a tribe into that of a country.

Marlowe has mistaken “Sarmata,” a Sarmatian, for the country Sarmatia.

[628] The old ed. gives “fell Mercury (Joue),” and in the next line “where it seems.” “Jove” written, as a correction, in the MS. above “it” was supposed by the printer to belong to the previous line.

[630] “Parts” must be pronounced as a dissyllable.

[636] The line is imperfect. We should have expected “at night wild beasts were seen” (“silvisque feras sub nocte relictis”).

[644] Here Marlowe quite deserts the original—

[648] The original has “Aquarius.”—Ganymede was changed into the sign Aquarius: see Hyginus’ Poeticon Astron. II. 29.

This is the only early edition. The title-page of the 1600 4to. of Hero and Leander has the words, “Whereunto is added the first booke of Lucan;” but the two pieces are not found in conjunction.