F. C. Phillips – The Fate of Fenella Chapter VI : A Woman’s View of the Matter

The Fate of Fenella Chapter VI : A Woman’s View of the Matter by Francis Charles Philips 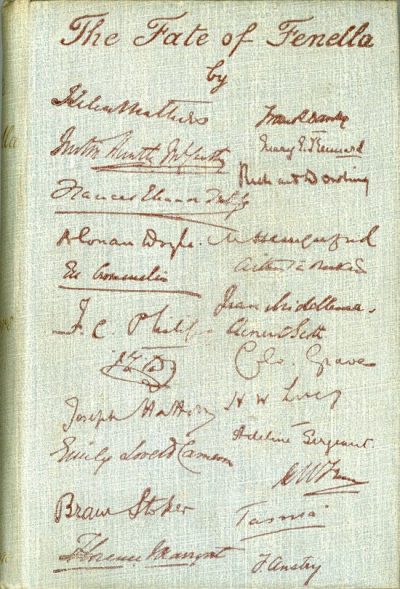 The Fate of Fenella Contents

The Fate of Fenella Chapter VI : A Woman’s View of the Matter

The Fate of Fenella Chapter VI : A Woman’s View of the Matter

The next morning Jacynth called upon his sister and explained to her that he wished her to extend a helping hand to Lady Francis Onslow. He had told Fenella that his sister Helen was “a good sort—a genuine woman,” and he was, therefore, disagreeably surprised when he found the view that lady took of the situation.

“Lady Francis Onslow?” she said, raising her eyebrows. “She is separated from her husband, is she not?”

“Yes, but it is not her fault,” answered Jacynth quickly. “Onslow treated her very badly.”

“I remember something about it,” said his sister. “I think there was a kind of shuffling of the cards and a new deal. Lord Francis took up with a Frenchwoman and his wife consoled herself with M. de Mürger. Is not that the story?”

“It is a garbled account of it. Lady Francis was perfectly innocent,” said Jacynth hotly.

“I have no doubt, but all the same I think I would rather have nothing to say to her. It is always a foolish thing to interfere between husband and wife.”

“I do not ask for your interference, Helen,” said her brother. “I merely ask you to let me introduce you to Lady Francis, and I should like you to be kind to her.”

“Because I think she has been badly treated, and because she is an impulsive, reckless little woman who will benefit much from your advice.”

“I dislike impulsive, reckless little women,” said Helen, “and I would much rather not know her.”

“You are very unkind, dear, and quite unlike your usual self. Lady Francis has got herself into a fix, and you must really get her out of it—to please me.”

“What fix has she got herself into?”

“Well, I will tell you. Her husband is here, as of course you know, and immediately after his arrival Mme. de Vigny appeared on the scene. Poor Lady Francis, who is naturally outraged at his conduct, telegraphed to De Mürger to come down, and this will, of course, make things look black for her if you do not give her your help and moral support. She does not know any ladies here, and of course she has acted imprudently.”

“Yes, she has acted imprudently and stupidly. It only confirms my impression that I would rather not know her,” said his sister.

“But, Helen, she is very young, and she has no one to advise her.”

“She has you to advise her,” laughed Helen; “and as you are a clever, rising barrister, I should have thought you would have been wise enough to have prevented her telegraphing for her lover.”

“He is not her lover,” shouted Jacynth loudly.

“As to her extreme youth,” pursued his sister, unmoved at his interruption, “she has a child old enough to play cricket on the green with the tinkers and the tailors and the butcher boys of the place. She must surely be out of her teens! And if she does not know how to behave herself now, I am afraid she never will.”

“Why are you so hard, Helen?” he asked, looking at his sister in surprise.

“I am not hard,” she answered, “but I really fail to see why you require my aid. Lady Francis seems quite able to take care* of herself. The fact is, Clitheroe,” she continued, “you must know as well as I do that the lex talionis does not apply to husbands and wives. It is only in quite the lower classes that the wife throws back the sugar basin at her husband when he has aimed at her with the teapot. Men have a certain license with regard to flirtation which has always been denied to women. It may be wrong—I dare say it is—but I am not going to head any movement to bring about a change.”

“I think she would listen to you if you would ask her to send M. de Mürger back to town,” said Jacynth. “As it is, they fear there may be a duel.”

“And you want me to mix myself up in all this unsavory business?” she exclaimed. “Really, Clitheroe, you are very unreasonable.”

“I am very sorry for Lady Francis,” he said, in a low voice.

“And I suppose you are in love with her. Nothing else could explain your strange persistency. You are very foolish, and you are wasting your time. If the woman cares for anyone, I suppose it is for her curly-headed attaché. It is evident that you are only being made use of, and I am certainly not going to follow your ridiculous example. Lady Francis possesses no possible interest for me. I consider her unladylike, wanting in savoir vivre and tact, and quite the last person for whom I could have any sympathy.”

“She has been cruelly treated,” said Jacynth.

“So have thousands of other women, but they manage to bear their cruel treatment and behave with better taste than Lady Francis.”

“What am I to say to her?” said Clitheroe, almost angrily. “She is waiting in the garden. I told her that you would call upon her this afternoon.”

“Then you took a very unwarrantable liberty,” said his sister. “I will not call upon her. I should advise you to tell her to send De Mürger away at once.”

“And then will you call upon her?” he asked eagerly.

“No, I won’t,” answered his sister. “I detest fuzzy-headed little women who get on well with any man except their husband. There will be an esclandre one day, and I don’t mean to be mixed up in it.”

“I had no idea you were so uncharitable,” he said, with genuine surprise.

“I am not the least uncharitable,” she said; “but you must admit that Lady Francis has everything against her.”

“Appearances may be against her,” he said doubtfully.

“And appearances in society count for everything,” said his sister. “If women wish to be original, and what you call reckless and impulsive, they must give up society, for you may be quite sure that they will meet with the cold shoulder wherever they go.”

“You have certainly shown it to Lady Francis,” he said bitterly.

“For the reason I have told you. As for your sentimental rubbish about her ill-treatment from her husband, she cannot have suffered so very dreadfully, as she has always had Count de Mürger to console her.”

“Thank you, Helen; you have said quite enough. I am sorry I attempted to enlist your sympathy, and I am doubly sorry that I mentioned you to Lady Francis. I don’t know what I shall say to her. You have placed me in a very awkward position.”

“You have placed yourself in one,” she said. “Why not leave Harrogate at once? You are only being made a tool of, and you had better let the partie carrée sort itself as best it may.”

Jacynth felt terribly perplexed, and he could scarcely help feeling that there was a certain amount of truth—a certain amount of worldly wisdom—in what his sister had said. Of course Fenella did not care for him, and never would. Everyone had warned him against her, and it was very foolish of him to indulge a wild dream which could never be anything but a wild dream. He was perfectly convinced of her innocence with respect to De Mürger, but evidently it was difficult to get others to share his credulity. And why should they believe that she was innocent when she allowed the man to come and stay in the hotel with her, in defiance, not only of her husband’s wishes, but also of all the laws of society and good taste? His sister’s words had been very severe and uncompromising, but he almost felt as if he must agree with her, and this feeling added to his annoyance and depression.

What could he say to the poor, little, misguided woman who was waiting for him to extricate her from her difficulties? How could he possibly explain to her that his sister had refused to make her acquaintance when he had told her that she might count upon her assistance and sympathy? He walked out of the house in a furious frame of mind. He was angry with his sister, and still more so with himself for being influenced by what she had said. He went straight to his rendezvous with Lady Francis, and when she caught sight of him she started up and came forward with outstretched hands. At once his doubts disappeared. It only needed one look from her pleading brown eyes for all his old confidence and infatuation to be restored.

“How kind you are!” said Fenella, with gratitude beaming in her face. “Have you been all this time with your sister? When am I to see her?”

Then Jacynth felt extremely uncomfortable, and looked down and kicked about the gravel, unable to answer the questions which were put to him.

“What did your sister say?” pursued Fenella. “Did you explain everything to her?”

“Yes, I explained everything,” he said awkwardly.

“But not so well as I can explain it,” she continued, and then, “I am sure I shall like your sister—that is to say, if she is like you.”

“She is not like me,” he said moodily. “She is altogether different.”

“Never mind,” she said brightly; “I shall like her all the same.”

“Yes? What are you afraid of?” she asked.

“You see, my sister is going away very shortly; in fact, she may leave any day,” he answered confusedly.

“Yes,” he continued desperately, “and, of course, as her stay here is going to be so very short, she thinks—I mean she fears——”

“She fears that she could not be of much assistance to you.”

“But I myself am not going to stay long,” she said. “But it will be very kind of her to let me see something of her before she leaves. It will silence the evil tongues.”

“She feels that it will be scarcely worth while to make your acquaintance,” said Jacynth, with a final violent kick at the gravel.

“I understand,” said Fenella, in altogether a different voice, and the light went out of her face.

“I can assure you——” said Jacynth, but Fenella stopped him.

“You need say no more,” she said. “Your sister refuses to know me. I daresay she is right.”

Then there was an awkward silence. Jacynth could find no excuses ready, and Fenella was inwardly very indignant. At last she managed to subdue her emotion sufficiently to say to him:

“I must thank you for the effort you have made on my behalf; you have been very kind, and whatever happens to me, I will never forget your kindness.”

Jacynth still found nothing to say, and, scarcely before he had realized it, Fenella had turned from him and was hastily running toward the hotel.

The Fate of Fenella Chapter VI : A Woman’s View of the Matter End

“Rita” – The Fate of Fenella Chapter VII : So Near – So Far Away

The Fate of Fenella

Leave a reply to F. C. Phillips – The Fate of Fenella Chapter VI : A Woman’s View of the Matter
Selected Authors
Popular