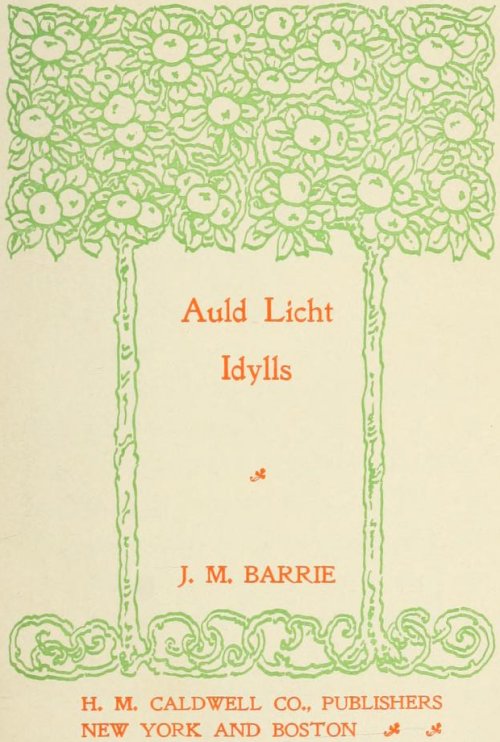 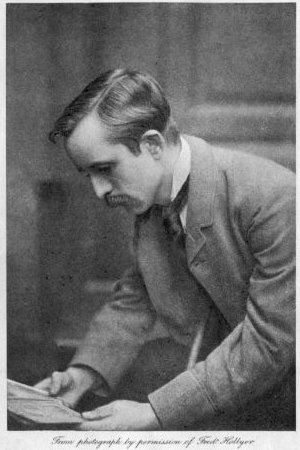 Early this morning I opened a window in my schoolhouse in the glen of Quharity, awakened by the shivering of a starving sparrow against the frosted glass. As the snowy sash creaked in my hand, he made off to the water-spout that suspends its “tangles” of ice over a gaping tank, and, rebounding from that, with a quiver of his little black breast, bobbed through the network of wire and joined a few of his fellows in a forlorn hop round the henhouse in search of food. Two days ago my hilarious bantam-cock, saucy to the last, my cheeriest companion, was found frozen in his own water-trough, the corn-saucer in three pieces by his side. Since then I have taken the hens into the house. At meal-times they litter the hearth with each other’s feathers; but for the most part they give little trouble, roosting on the rafters of the low-roofed kitchen among staves and fishing-rods.

Another white blanket has been spread upon the glen since I looked out last night; for over the same wilderness of snow that has met my gaze for a week, I see the steading of Waster Lunny sunk deeper into the waste. The schoolhouse, I suppose, serves similarly as a snowmark for the people at the farm. Unless that is Waster Lunny’s grieve foddering the cattle in the snow, not a living thing is visible. The ghostlike hills that pen in the glen have ceased to echo to the sharp crack of the sportsman’s gun (so clear in the frosty air as to be a warning to every rabbit and partridge in the valley); and only giant Catlaw shows here and there a black ridge, rearing its head at the entrance to the glen and struggling ineffectually to cast off his shroud. Most wintry sign of all, I think as I close the window hastily, is the open farm-stile, its poles lying embedded in the snow where they were last flung by Waster Lunny’s herd. Through the still air comes from a distance a vibration as of a tuning-fork: a robin, perhaps, alighting on the wire of a broken fence.

In the warm kitchen, where I dawdle over my breakfast, the widowed bantam-hen has perched on the back of my drowsy cat. It is needless to go through the form of opening the school to-day; for, with the exception of Waster Lunny’s girl, I have had no scholars for nine days. Yesterday she announced that there would be no more schooling till it was fresh, “as she wasna comin’;” and indeed, though the smoke from the farm chimneys is a pretty prospect for a snowed-up schoolmaster, the trudge between the two houses must be weary work for a bairn. As for the other children, who have to come from all parts of the hills and glen, I may not see them for weeks. Last year the school was practically deserted for a month. A pleasant outlook, with the March examinations staring me in the face, and an inspector fresh from Oxford. I wonder what he would say if he saw me to-day digging myself out of the schoolhouse with the spade I now keep for the purpose in my bedroom.

The kail grows brittle from the snow in my dank and cheerless garden. A crust of bread gathers timid pheasants round me. The robins, I see, have made the coalhouse their home. Waster Lunny’s dog never barks without rousing my sluggish cat to a joyful response. It is Dutch courage with the birds and beasts of the glen, hard driven for food; but I look attentively for them in these long forenoons, and they have begun to regard me as one of themselves. My breath freezes, despite my pipe, as I peer from the door; and with a fortnight-old newspaper I retire to the ingle-nook. The friendliest thing I have seen to-day is the well-smoked ham suspended from my kitchen rafters. It was a gift from the farm of Tullin, with a load of peats, the day before the snow began to fall. I doubt if I have seen a cart since.

This afternoon I was the not altogether passive spectator of a curious scene in natural history. My feet encased in stout “tackety” boots, I had waded down two of Waster Lunny’s fields to the glen burn: in summer the never-failing larder from which, with wriggling worm or garish fly, I can any morning whip a savoury breakfast; in the winter-time the only thing in the valley that defies the ice-king’s chloroform. I watched the water twisting black and solemn through the snow, the ragged ice on its edge proof of the toughness of the struggle with the frost, from which it has, after all, crept only half victorious. A bare wild rosebush on the further bank was violently agitated, and then there ran from its root a black-headed rat with wings. Such was the general effect. I was not less interested when my startled eyes divided this phenomenon into its component parts, and recognized in the disturbance on the opposite bank only another fierce struggle among the hungry animals for existence: they need no professor to teach them the doctrine of the survival of the fittest. A weasel had gripped a water-hen (whit-rit and beltie they are called in these parts) cowering at the root of the rose-bush, and was being dragged down the bank by the terrified bird, which made for the water as its only chance of escape. In less disadvantageous circumstances the weasel would have made short work of his victim; but as he only had the bird by the tail, the prospects of the combatants were equalized. It was the tug-of-war being played with a life as the stakes. “If I do not reach the water,” was the argument that went on in the heaving little breast of the one, “I am a dead bird.” “If this water-hen,” reasoned the other, “reaches the burn, my supper vanishes with her.” Down the sloping bank the hen had distinctly the best of it, but after that came a yard of level snow, and here she tugged and screamed in vain. I had so far been an unobserved spectator; but my sympathies were with the beltie, and, thinking it high time to interfere, I jumped into the water. The water-hen gave one mighty final tug and toppled into the burn; while the weasel viciously showed me his teeth, and then stole slowly up the bank to the rose-bush, whence, “girning,” he watched me lift his exhausted victim from the water, and set off with her for the schoolhouse. Except for her draggled tail, she already looks wonderfully composed, and so long as the frost holds I shall have little difficulty in keeping her with me. On Sunday I found a frozen sparrow, whose heart had almost ceased to beat, in the disused pig-sty, and put him for warmth into my breast-pocket. The ungrateful little scrub bolted without a word of thanks about ten minutes afterwards to the alarm of my cat, which had not known his whereabouts.

I am alone in the schoolhouse. On just such an evening as this last year my desolation drove me to Waster Lunny, where I was storm-stayed for the night. The recollection decides me to court my own warm hearth, to challenge my right hand again to a game at the “dambrod” against my left. I do not lock the schoolhouse door at nights; for even a highwayman (there is no such luck) would be received with open arms, and I doubt if there be a barred door in all the glen. But it is cosier to put on the shutters. The road to Thrums has lost itself miles down the valley. I wonder what they are doing out in the world. Though I am the Free Church precentor in Thrums (ten pounds a year, and the little town is five miles away), they have not seen me for three weeks. A packman whom I thawed yesterday at my kitchen fire tells me, that last Sabbath only the Auld Lichts held service. Other people realized that they were snowed up. Far up the glen, after it twists out of view, a manse and half a dozen thatched cottages that are there may still show a candle light, and the crumbling gravestones keep cold vigil round the grey old kirk. Heavy shadows fade into the sky to the north. A flake trembles against the window; but it is too cold for much snow to-night. The shutter bars the outer world from the schoolhouse.