J. M. Barrie – My Lady Nicotine A Study in Smoke

My Lady Nicotine Chapter XX. Primus to his Uncle

Though we all pretended to be glad when Primus went, we spoke of him briefly at times, and I read his letters aloud at our evening meetings. Here is a series of them from my desk. Primus was now a year and a half older and his spelling had improved.

Dear Uncle:—Though I have not written to you for a long time I often think about you and Mr. Gilray and the rest and the Arcadia Mixture, and I beg to state that my mother will have informed you I am well and happy but a little overworked, as I am desirous of pleasing my preceptor by obtaining a credible position in the exams, and we breakfast at 7:30 sharp. I suppose you are to give me a six-shilling thing again as a Christmas present, so I drop you a line not to buy something I don’t want, as it is only thirty-nine days to Christmas. I think I’ll have a book again, but not a fairy tale or any of that sort, nor the “Swiss Family Robinson,” nor any of the old books. There is a rattling story called “Kidnapped,” by H. Rider Haggard, but it is only five shillings, so if you thought of it you could make up the six shillings by giving me a football belt. Last year you gave me “The Formation of Character,” and I read it with great mental improvement and all that, but this time I want a change, namely, (1) not a fairy tale, (2) not an old book, (3) not mental improvement book. Don’t fix on anything without telling me first what it is. Tell William John I walked into Darky and settled him in three rounds. Best regards to Mr. Gilray and the others.

Dear Uncle:—Our preceptor is against us writing letters he doesn’t see, so I have to carry the paper to the dormitory up my waistcoat and write there, and I wish old Poppy smoked the Arcadia Mixture to make him more like you. Never mind about the football belt, as I got Johnny Fox’s for two white mice; so I don’t want “Kidnapped,” which I wrote about to you, as I want you to stick to six-shilling book. There is one called “Dead Man’s Rock” that Dickson Secundus has heard about, and it sounds well; but it is never safe to go by the name, so don’t buy it till I hear more about it. If you see biographies of it in the newspapers you might send them to me, as it should be about pirates by the title, but the author does not give his name, which is rather suspicious. So, remember, don’t buy it yet, and also find out price, whether illustrated, and how many pages. Ballantyne’s story this year is about the fire-brigade; but I don’t think I’ll have it, as he is getting rather informative, and I have one of his about the fire-brigade already. Of course I don’t fix not to have it, only don’t buy it at present. Don’t buy “Dead Man’s Rock” either. I am working diligently, and tell the housekeeper my socks is all right. We may fix on “Dead Man’s Rock,” but it is best not to be in a hurry.

Dear Uncle:—I don’t think I’ll have “Dead Man’s Rock,” as Hope has two stories out this year, and he is a safe man to go to. The worst of it is that they are three-and-six each, and Dickson Secundus says they are continuations of each other, so it is best to have them both or neither. The two at three-and-six would make seven shillings, and I wonder if you would care to go that length this year. I am getting on first rate with my Greek, and will do capital if my health does not break down with overpressure. Perhaps if you bought the two you would get them for 6s. 6d. Or what do you say to the housekeeper’s giving me a shilling of it, and not sending the neckties?

Dear Uncle:—I was disappointed at not hearing from you this morning, but conclude you are very busy. I don’t want Hope’s books, but I think I’ll rather have a football. We played Gloucester on Tuesday and beat them all to sticks (five goals two tries to one try!!!). It would cost 7s. 6d., and I’ll make up the one-and-six myself out of my pocket-money; but you can pay it all just now, and then I’ll pay you later when I am more flush than I am at present. I’d better buy it myself, or you might not get the right kind, so you might send the money in a postal order by return. You get the postal orders at the nearest postoffice, and inclose them in a letter. I want the football at once. (1) Not a book of any kind whatever; (2) a football, but I’ll buy it myself; (3) price 7s. 6d.; (4) send postal order.

Dear Uncle:—Kindly inform William John that I am in receipt of his favor of yesterday prox., and also your message, saying am I sure it is a football I want. I have to inform you that I have changed my mind and think I’ll stick to a book (or two books according to price), after all. Dickson Secundus has seen a newspaper biography of “Dead Man’s Rock” and it is ripping, but, unfortunately, there is a lot in it about a girl. So don’t buy “Dead Man’s Rock” for me. I told Fox about Hope’s two books and he advises me to get one of them (3s. 6d.), and to take the rest of the money (2s. 6d.) in cash, making in all six shillings. I don’t know if I should like that plan, though fair to both parties, as Dickson Secundus once took money from his father instead of a book and it went like winking with nothing left to show for it; but I’ll think it over between my scholastic tasks and write to you again, so do nothing till you hear from me, and mind I don’t want football.

Dear Uncle:—Don’t buy Hope’s books. There is a grand story out by Jules Verne about a man who made a machine that enabled him to walk on his head through space with seventy-five illustrations; but the worst of it is it costs half a guinea. Of course I don’t ask you to give so much as that; but it is a pity it cost so much, as it is evidently a ripping book, and nothing like it. Ten-and-six is a lot of money. What do you think? I inclose for your consideration a newspaper account of it, which says it will fire the imagination and teach boys to be manly and self-reliant. Of course you could not give it to me; but I think it would do me good, and am working so hard that I have no time for physical exercise. It is to be got at all booksellers. P.S.—Fox has read “Dead Man’s Rock,” and likes it A 1.

Dear Uncle:—I was thinking about Jules Verne’s book last night after I went to bed, and I see a way of getting it which both Dickson Secundus and Fox consider fair. I want you to give it to me as my Christmas present for both this year and next year. Thus I won’t want a present from you next Christmas; but I don’t mind that so long as I get this book. One six-shilling book this year and another next year would come to 12s., and Jules Verne’s book is only 10s. 6d., so this plan will save you 1s. 6d. in the long run. I think you should buy it at once, in case they are all sold out before Christmas.

My Dear Uncle:—I hope you haven’t bought the book yet, as Dickson Secundus has found out that there is a shop in the Strand where all the books are sold cheap. You get threepence off every shilling, so you would get a ten-and-six book for 7s. 10-½d. That will let you get me a cheapish one next year, after all. I inclose the address.

Dear Uncle:—Dickson Secundus was looking to-day at “The Formation of Character,” which you gave me last year, and he has found out that it was bought in the shop in the Strand that I wrote you about, so you got it for 4s. 6d. We have been looking up the books I got from you at other Christmases, and they all have the stamp on them which shows they were bought at that shop. Some of them I got when I was a kid, and that was the time you gave me 2s. and 3s. 6d. books; but Dickson Secundus and Fox have been helping me to count up how much you owe me as follows: 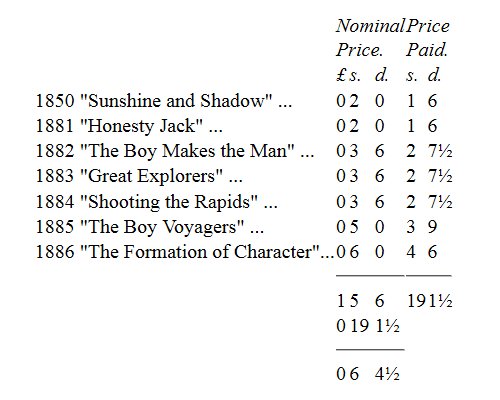 Thus 6s. 4½d. is the exact sum. The best plan will be for you not to buy anything for me till I get my holidays, when my father is to bring me to London. Tell William John I am coming.

P.S.—I told my father about the Arcadia Mixture, and that is why he is coming to London.