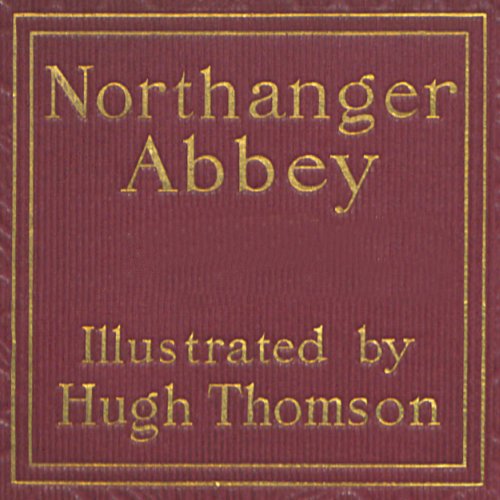 A Note On The Text
Northanger Abbey was written in 1797-98 under a different title. The manuscript was revised around 1803 and sold to a London publisher, Crosbie & Co., who sold it back in 1816. The Signet Classic text is based on the first edition, published by John Murray, London, in 1818—the year following Miss Austen’s death. Spelling and punctuation have been largely brought into conformity with modern British usage

Advertisement By The Authoress, To Northanger Abbey

THIS little work was finished in the year 1803, and intended for immediate publication. It was disposed of to a bookseller, it was even advertised, and why the business proceeded no farther, the author has never been able to learn. That any bookseller should think it worth-while to purchase what he did not think it worth-while to publish seems extraordinary. But with this, neither the author nor the public have any other concern than as some observation is necessary upon those parts of the work which thirteen years have made comparatively obsolete. The public are entreated to bear in mind that thirteen years have passed since it was finished, many more since it was begun, and that during that period, places, manners, books, and opinions have undergone considerable changes.

No one who had ever seen Catherine Morland in her infancy would have supposed her born to be an heroine. Her situation in life, the character of her father and mother, her own person and disposition, were all equally against her. Her father was a clergyman, without being neglected, or poor, and a very respectable man, though his name was Richard—and he had never been handsome. He had a considerable independence besides two good livings—and he was not in the least addicted to locking up his daughters. Her mother was a woman of useful plain sense, with a good temper, and, what is more remarkable, with a good constitution. She had three sons before Catherine was born; and instead of dying in bringing the latter into the world, as anybody might expect, she still lived on—lived to have six children more—to see them growing up around her, and to enjoy excellent health herself. A family of ten children will be always called a fine family, where there are heads and arms and legs enough for the number; but the Morlands had little other right to the word, for they were in general very plain, and Catherine, for many years of her life, as plain as any. She had a thin awkward figure, a sallow skin without colour, dark lank hair, and strong features—so much for her person; and not less unpropitious for heroism seemed her mind. She was fond of all boy’s plays, and greatly preferred cricket not merely to dolls, but to the more heroic enjoyments of infancy, nursing a dormouse, feeding a canary-bird, or watering a rose-bush. Indeed she had no taste for a garden; and if she gathered flowers at all, it was chiefly for the pleasure of mischief—at least so it was conjectured from her always preferring those which she was forbidden to take. Such were her propensities—her abilities were quite as extraordinary. She never could learn or understand anything before she was taught; and sometimes not even then, for she was often inattentive, and occasionally stupid. Her mother was three months in teaching her only to repeat the “Beggar’s Petition”; and after all, her next sister, Sally, could say it better than she did. Not that Catherine was always stupid—by no means; she learnt the fable of “The Hare and Many Friends” as quickly as any girl in England. Her mother wished her to learn music; and Catherine was sure she should like it, for she was very fond of tinkling the keys of the old forlorn spinnet; so, at eight years old she began. She learnt a year, and could not bear it; and Mrs. Morland, who did not insist on her daughters being accomplished in spite of incapacity or distaste, allowed her to leave off. The day which dismissed the music-master was one of the happiest of Catherine’s life. Her taste for drawing was not superior; though whenever she could obtain the outside of a letter from her mother or seize upon any other odd piece of paper, she did what she could in that way, by drawing houses and trees, hens and chickens, all very much like one another. Writing and accounts she was taught by her father; French by her mother: her proficiency in either was not remarkable, and she shirked her lessons in both whenever she could. What a strange, unaccountable character!—for with all these symptoms of profligacy at ten years old, she had neither a bad heart nor a bad temper, was seldom stubborn, scarcely ever quarrelsome, and very kind to the little ones, with few interruptions of tyranny; she was moreover noisy and wild, hated confinement and cleanliness, and loved nothing so well in the world as rolling down the green slope at the back of the house.

Such was Catherine Morland at ten. At fifteen, appearances were mending; she began to curl her hair and long for balls; her complexion improved, her features were softened by plumpness and colour, her eyes gained more animation, and her figure more consequence. Her love of dirt gave way to an inclination for finery, and she grew clean as she grew smart; she had now the pleasure of sometimes hearing her father and mother remark on her personal improvement. “Catherine grows quite a good-looking girl—she is almost pretty today,” were words which caught her ears now and then; and how welcome were the sounds! To look almost pretty is an acquisition of higher delight to a girl who has been looking plain the first fifteen years of her life than a beauty from her cradle can ever receive. 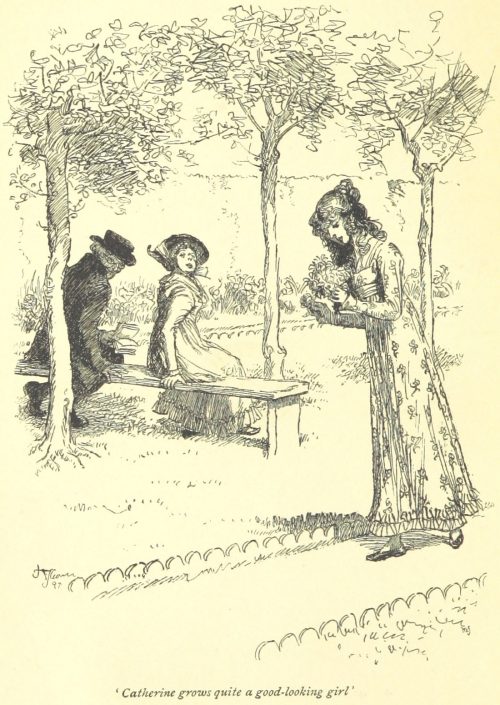 Mrs. Morland was a very good woman, and wished to see her children everything they ought to be; but her time was so much occupied in lying-in and teaching the little ones, that her elder daughters were inevitably left to shift for themselves; and it was not very wonderful that Catherine, who had by nature nothing heroic about her, should prefer cricket, baseball, riding on horseback, and running about the country at the age of fourteen, to books—or at least books of information—for, provided that nothing like useful knowledge could be gained from them, provided they were all story and no reflection, she had never any objection to books at all. But from fifteen to seventeen she was in training for a heroine; she read all such works as heroines must read to supply their memories with those quotations which are so serviceable and so soothing in the vicissitudes of their eventful lives.

From Pope, she learnt to censure those who

“bear about the mockery of woe.”

“Many a flower is born to blush unseen,
“And waste its fragrance on the desert air.”

“It is a delightful task
“To teach the young idea how to shoot.”

And from Shakespeare she gained a great store of information—amongst the rest, that—

“Trifles light as air,
“Are, to the jealous, confirmation strong,
“As proofs of Holy Writ.”

“The poor beetle, which we tread upon,
“In corporal sufferance feels a pang as great
“As when a giant dies.”

And that a young woman in love always looks—

So far her improvement was sufficient—and in many other points she came on exceedingly well; for though she could not write sonnets, she brought herself to read them; and though there seemed no chance of her throwing a whole party into raptures by a prelude on the pianoforte, of her own composition, she could listen to other people’s performance with very little fatigue. Her greatest deficiency was in the pencil—she had no notion of drawing—not enough even to attempt a sketch of her lover’s profile, that she might be detected in the design. There she fell miserably short of the true heroic height. At present she did not know her own poverty, for she had no lover to portray. She had reached the age of seventeen, without having seen one amiable youth who could call forth her sensibility, without having inspired one real passion, and without having excited even any admiration but what was very moderate and very transient. This was strange indeed! But strange things may be generally accounted for if their cause be fairly searched out. There was not one lord in the neighbourhood; no—not even a baronet. There was not one family among their acquaintance who had reared and supported a boy accidentally found at their door—not one young man whose origin was unknown. Her father had no ward, and the squire of the parish no children.

But when a young lady is to be a heroine, the perverseness of forty surrounding families cannot prevent her. Something must and will happen to throw a hero in her way.

Mr. Allen, who owned the chief of the property about Fullerton, the village in Wiltshire where the Morlands lived, was ordered to Bath for the benefit of a gouty constitution—and his lady, a good-humoured woman, fond of Miss Morland, and probably aware that if adventures will not befall a young lady in her own village, she must seek them abroad, invited her to go with them. Mr. and Mrs. Morland were all compliance, and Catherine all happiness.