The Path of Roses Poem by Lewis Carroll (Charles Dodgson)

Poetry from Three Sunsets and Other Poems. 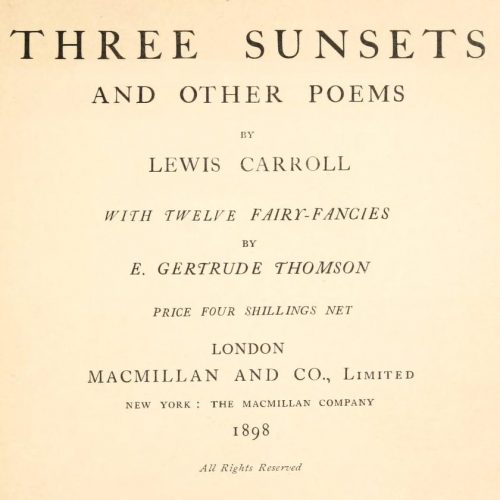 The Path of Roses Poem 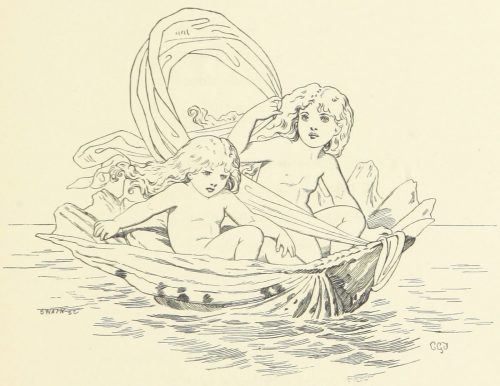 In the dark silence of an ancient room,
Whose one tall window fronted to the West,
Where, through laced tendrils of a hanging vine,
The sunset-glow was fading into night,
Sat a pale Lady, resting weary hands
Upon a great clasped volume, and her face
Within her hands. Not as in rest she bowed,
But large hot tears were coursing down her cheek,
And her low-panted sobs broke awefully
Upon the sleeping echoes of the night.
Soon she unclasp’d the volume once again,
And read the words in tone of agony,
As in self-torture, weeping as she read:—

“He crowns the glory of his race:
He prayeth but in some fit place
To meet his foeman face to face:

“And, battling for the True, the Right,
From ruddy dawn to purple night,
To perish in the midmost fight:

“Where hearts are fierce and hands are strong,
Where peals the bugle loud and long,
Where blood is dropping in the throng:

“Still, with a dim and glazing eye,
To watch the tide of victory,
To hear in death the battle-cry:

“Then, gathered grandly to his grave,
To rest among the true and brave,
In holy ground, where yew-trees wave:

“Where, from church-windows sculptured fair,
Float out upon the evening air
The note of praise, the voice of prayer:

“Where no vain marble mockery
Insults with loud and boastful lie
The simple soldier’s memory:

“Where sometimes little children go,
And read, in whisper’d accent slow,
The name of him who sleeps below.”

Her voice died out: like one in dreams she sat.
“Alas!” she sighed. “For what can Woman do?
Her life is aimless, and her death unknown:
Hemmed in by social forms she pines in vain.
Man has his work, but what can Woman do?”
And answer came there from the creeping gloom,
The creeping gloom that settled into night:
“Peace! For thy lot is other than a man’s:
His is a path of thorns: he beats them down:
He faces death: he wrestles with despair.
Thine is of roses, to adorn and cheer
His lonely life, and hide the thorns in flowers.”
She spake again: in bitter tone she spake:
“Aye, as a toy, the puppet of an hour,
Or a fair posy, newly plucked at morn,
But flung aside and withered ere the night.”
And answer came there from the creeping gloom,
The creeping gloom that blackened into night:
“So shalt thou be the lamp to light his path,
What time the shades of sorrow close around.”
And, so it seemed to her, an awful light
Pierced slowly through the darkness, orbed, and grew,
Until all passed away—the ancient room—
The sunlight dying through the trellised vine—
The one tall window—all had passed away,
And she was standing on the mighty hills.
Beneath, around, and far as eye could see,
Squadron on squadron, stretched opposing hosts,
Ranked as for battle, mute and motionless.
Anon a distant thunder shook the ground,
The tramp of horses, and a troop shot by—
Plunged headlong in that living sea of men—
Plunged to their death: back from that fatal field
A scattered handful, fighting hard for life,
Broke through the serried lines; but, as she gazed,
They shrank and melted, and their forms grew thin—
Grew pale as ghosts when the first morning ray
Dawns from the East—the trumpet’s brazen blare
Died into silence—and the vision passed—
Passed to a room where sick and dying lay
In long, sad line—there brooded Fear and Pain—
Darkness was there, the shade of Azrael’s wing.
But there was one that ever, to and fro,
Moved with light footfall: purely calm her face,
And those deep steadfast eyes that starred the gloom:
Still, as she went, she ministered to each
Comfort and counsel; cooled the fevered brow
With softest touch, and in the listening ear
Of the pale sufferer whispered words of peace.
The dying warrior, gazing as she passed,
Clasped his thin hands and blessed her. Bless her too,
Thou, who didst bless the merciful of old!
So prayed the Lady, watching tearfully
Her gentle moving onward, till the night
Had veiled her wholly, and the vision passed.
Then once again the solemn whisper came:
“So in the darkest path of man’s despair,
Where War and Terror shake the troubled earth,
Lies woman’s mission; with unblenching brow
To pass through scenes of horror and affright
Where men grow sick and tremble: unto her
All things are sanctified, for all are good.
Nothing so mean, but shall deserve her care:
Nothing so great, but she may bear her part.
No life is vain: each hath his place assigned:
Do thou thy task, and leave the rest to God.”
And there was silence, but the Lady made
No answer, save one deeply-breathed “Amen.”
And she arose, and in that darkening room
Stood lonely as a spirit of the night—
Stood calm and fearless in the gathered night—
And raised her eyes to heaven. There were tears
Upon her face, but in her heart was peace,
Peace that the world nor gives nor takes away!

The Path of Roses Poem End