Portrait of a Lady Poem by T. S. Eliot

Thou hast committed—
Fornication: but that was in another country
And besides, the wench is dead.
The Jew of Malta.

Among the smoke and fog of a December afternoon
You have the scene arrange itself—as it will seem to do—
With “I have saved this afternoon for you”;
And four wax candles in the darkened room,
Four rings of light upon the ceiling overhead,
An atmosphere of Juliet’s tomb
Prepared for all the things to be said, or left unsaid.
We have been, let us say, to hear the latest Pole
Transmit the Preludes, through his hair and finger-tips.
“So intimate, this Chopin, that I think his soul
Should be resurrected only among friends
Some two or three, who will not touch the bloom
That is rubbed and questioned in the concert room.”
—And so the conversation slips
Among velleities and carefully caught regrets
Through attenuated tones of violins
Mingled with remote cornets
And begins.

“You do not know how much they mean to me, my friends,
And how, how rare and strange it is, to find
In a life composed so much, so much of odds and ends,
(For indeed I do not love it… you knew? you are not blind!
How keen you are!)
To find a friend who has these qualities,
Who has, and gives
Those qualities upon which friendship lives.
How much it means that I say this to you—
Without these friendships—life, what cauchemar!”
Among the windings of the violins
And the ariettes
Of cracked cornets
Inside my brain a dull tom-tom begins
Absurdly hammering a prelude of its own,
Capricious monotone
That is at least one definite “false note.”
—Let us take the air, in a tobacco trance,
Admire the monuments
Discuss the late events,
Correct our watches by the public clocks.
Then sit for half an hour and drink our bocks.

Now that lilacs are in bloom
She has a bowl of lilacs in her room
And twists one in her fingers while she talks.
“Ah, my friend, you do not know, you do not know
What life is, you should hold it in your hands”;
(Slowly twisting the lilac stalks)
“You let it flow from you, you let it flow,
And youth is cruel, and has no remorse
And smiles at situations which it cannot see.”
I smile, of course,
And go on drinking tea.
“Yet with these April sunsets, that somehow recall
My buried life, and Paris in the Spring,
I feel immeasurably at peace, and find the world
To be wonderful and youthful, after all.”

You are invulnerable, you have no Achilles’ heel.
You will go on, and when you have prevailed
You can say: at this point many a one has failed.

But what have I, but what have I, my friend,
To give you, what can you receive from me?
Only the friendship and the sympathy
Of one about to reach her journey’s end.

I shall sit here, serving tea to friends….”

I take my hat: how can I make a cowardly amends
For what she has said to me?
You will see me any morning in the park
Reading the comics and the sporting page.
Particularly I remark An English countess goes upon the stage.
A Greek was murdered at a Polish dance,
Another bank defaulter has confessed.
I keep my countenance, I remain self-possessed
Except when a street piano, mechanical and tired
Reiterates some worn-out common song
With the smell of hyacinths across the garden
Recalling things that other people have desired.
Are these ideas right or wrong?

The October night comes down; returning as before
Except for a slight sensation of being ill at ease
I mount the stairs and turn the handle of the door
And feel as if I had mounted on my hands and knees.

“And so you are going abroad; and when do you return?
But that’s a useless question.
You hardly know when you are coming back,
You will find so much to learn.”
My smile falls heavily among the bric-à-brac.

“Perhaps you can write to me.”
My self-possession flares up for a second;
This is as I had reckoned.

“I have been wondering frequently of late
(But our beginnings never know our ends!)
Why we have not developed into friends.”
I feel like one who smiles, and turning shall remark
Suddenly, his expression in a glass.
My self-possession gutters; we are really in the dark.

“For everybody said so, all our friends,
They all were sure our feelings would relate
So closely! I myself can hardly understand.
We must leave it now to fate.
You will write, at any rate.
Perhaps it is not too late.
I shall sit here, serving tea to friends.”

And I must borrow every changing shape
To find expression… dance, dance
Like a dancing bear,
Cry like a parrot, chatter like an ape.
Let us take the air, in a tobacco trance—
Well! and what if she should die some afternoon,
Afternoon grey and smoky, evening yellow and rose;
Should die and leave me sitting pen in hand
With the smoke coming down above the housetops;
Doubtful, for quite a while
Not knowing what to feel or if I understand
Or whether wise or foolish, tardy or too soon…
Would she not have the advantage, after all?
This music is successful with a “dying fall”
Now that we talk of dying—
And should I have the right to smile? 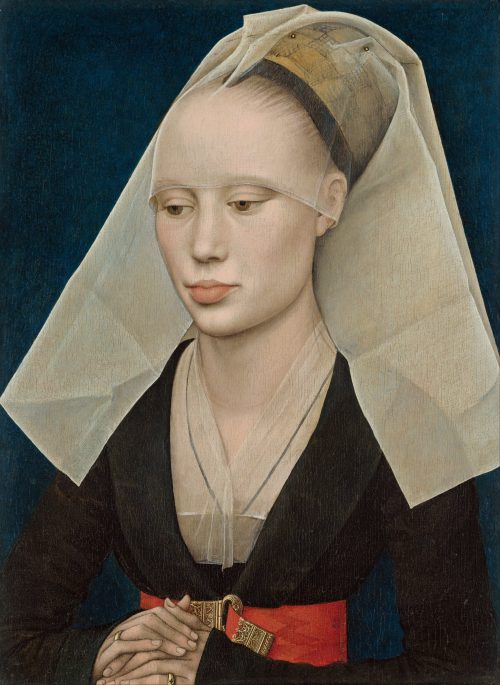 Portrait of a Lady Painting by Rogier van der Weyden