A. C. Doyle – The Home-Coming of the Eurydice Poem

The Home-Coming of the Eurydice Poem : Songs of Action Poetry by Arthur Conan Doyle 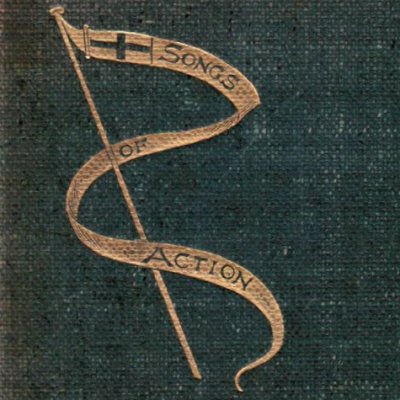 The Home-Coming of the Eurydice Poem

The Home-Coming of the Eurydice Poem

[Lost, with her crew of three hundred boys, on the last day of her voyage, March 23, 1876. She foundered off Portsmouth, from which town many of the boys came. ]

Up with the royals that top the white spread of her!
Press her and dress her, and drive through the foam;
The Island’s to port, and the mainland ahead of her,
Hey for the Warner and Hayling and Home!

Bo’sun, O Bo’sun, just look at the green of it!
Look at the red cattle down by the hedge!
Look at the farmsteading—all that is seen of it,
One little gable end over the edge! ‘

‘Lord! the tongues of them clattering, clattering,
All growing wild at a peep of the Wight;
Aye, sir, aye, it has set them all chattering,
Thinking of home and their mothers to-night. ‘

Spread the topgallants—oh, lay them out lustily!
What though it darken o’er Netherby Combe?
‘Tis but the valley wind, puffing so gustily –
On for the Warner and Hayling and Home!

‘Bo’sun, O Bo’sun, just see the long slope of it!
Culver is there, with the cliff and the light.
Tell us, oh tell us, now is there a hope of it?
Shall we have leave for our homes for to-night? ‘

‘Tut, the clack of them! Steadily! Steadily!
Aye, as you say, sir, they’re little ones still;
One long reach should open it readily,
Round by St. Helens and under the hill.

‘The Spit and the Nab are the gates of the promise,
Their mothers to them—and to us it’s our wives.
I’ve sailed forty years, and—By God it’s upon us!
Down royals, Down top’sles, down, down, for your lives! ‘

A grey swirl of snow with the squall at the back of it,
Heeling her, reeling her, beating her down!
A gleam of her bends in the thick of the wrack of it,
A flutter of white in the eddies of brown.

It broke in one moment of blizzard and blindness;
The next, like a foul bat, it flapped on its way.
But our ship and our boys! Gracious Lord, in your kindness,
Give help to the mothers who need it to-day!

Give help to the women who wait by the water,
Who stand on the Hard with their eyes past the Wight.
Ah! whisper it gently, you sister or daughter,
‘Our boys are all gathered at home for to-night. ‘

Leave a reply to A. C. Doyle – The Home-Coming of the Eurydice Poem
Selected Authors
Popular