Bram Stoker – The Lair of the White Worm

The Lair of the White Worm by Bram Stoker 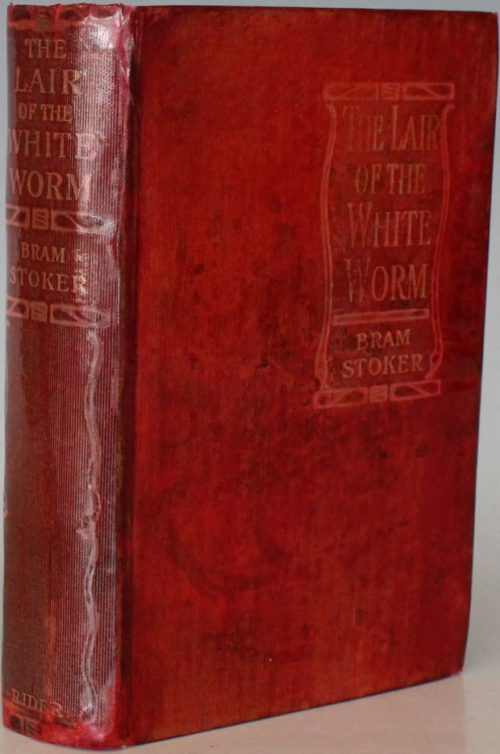 Note: This is the 1925 highly abridged and rewritten form of The Lair of the White Worm (first published 1911). The 1925 version is shortened by more than 100 pages, the rewritten book having 28 chapters vs the original 40 chapters. The final eleven chapters were cut down to five, leading some critics to complain that the ending was abrupt and inconsistent.

The Lair of the White Worm

The Lair of the White Worm Contents

The Lair of the White Worm

The Lair of the White Worm Chapter I – Adam Salton Arrives

Adam Salton sauntered into the Empire Club, Sydney, and found awaiting him a letter from his grand-uncle.  He had first heard from the old gentleman less than a year before, when Richard Salton had claimed kinship, stating that he had been unable to write earlier, as he had found it very difficult to trace his grand-nephew’s address.  Adam was delighted and replied cordially; he had often heard his father speak of the older branch of the family with whom his people had long lost touch.  Some interesting correspondence had ensued.  Adam eagerly opened the letter which had only just arrived, and conveyed a cordial invitation to stop with his grand-uncle at Lesser Hill, for as long a time as he could spare.

“Indeed,” Richard Salton went on, “I am in hopes that you will make your permanent home here.  You see, my dear boy, you and I are all that remain of our race, and it is but fitting that you should succeed me when the time comes.  In this year of grace, 1860, I am close on eighty years of age, and though we have been a long-lived race, the span of life cannot be prolonged beyond reasonable bounds.  I am prepared to like you, and to make your home with me as happy as you could wish.  So do come at once on receipt of this, and find the welcome I am waiting to give you.  I send, in case such may make matters easy for you, a banker’s draft for £200.  Come soon, so that we may both of us enjoy many happy days together.  If you are able to give me the pleasure of seeing you, send me as soon as you can a letter telling me when to expect you.  Then when you arrive at Plymouth or Southampton or whatever port you are bound for, wait on board, and I will meet you at the earliest hour possible.”

Old Mr. Salton was delighted when Adam’s reply arrived and sent a groom hot-foot to his crony, Sir Nathaniel de Salis, to inform him that his grand-nephew was due at Southampton on the twelfth of June.

Mr. Salton gave instructions to have ready a carriage early on the important day, to start for Stafford, where he would catch the 11.40 a.m. train.  He would stay that night with his grand-nephew, either on the ship, which would be a new experience for him, or, if his guest should prefer it, at a hotel.  In either case they would start in the early morning for home.  He had given instructions to his bailiff to send the postillion carriage on to Southampton, to be ready for their journey home, and to arrange for relays of his own horses to be sent on at once.  He intended that his grand-nephew, who had been all his life in Australia, should see something of rural England on the drive.  He had plenty of young horses of his own breeding and breaking, and could depend on a journey memorable to the young man.  The luggage would be sent on by rail to Stafford, where one of his carts would meet it.  Mr. Salton, during the journey to Southampton, often wondered if his grand-nephew was as much excited as he was at the idea of meeting so near a relation for the first time; and it was with an effort that he controlled himself.  The endless railway lines and switches round the Southampton Docks fired his anxiety afresh.

As the train drew up on the dockside, he was getting his hand traps together, when the carriage door was wrenched open and a young man jumped in.

“How are you, uncle?  I recognised you from the photo you sent me!  I wanted to meet you as soon as I could, but everything is so strange to me that I didn’t quite know what to do.  However, here I am.  I am glad to see you, sir.  I have been dreaming of this happiness for thousands of miles; now I find that the reality beats all the dreaming!”  As he spoke the old man and the young one were heartily wringing each other’s hands.

The meeting so auspiciously begun proceeded well.  Adam, seeing that the old man was interested in the novelty of the ship, suggested that he should stay the night on board, and that he would himself be ready to start at any hour and go anywhere that the other suggested.  This affectionate willingness to fall in with his own plans quite won the old man’s heart.  He warmly accepted the invitation, and at once they became not only on terms of affectionate relationship, but almost like old friends.  The heart of the old man, which had been empty for so long, found a new delight.  The young man found, on landing in the old country, a welcome and a surrounding in full harmony with all his dreams throughout his wanderings and solitude, and the promise of a fresh and adventurous life.  It was not long before the old man accepted him to full relationship by calling him by his Christian name.  After a long talk on affairs of interest, they retired to the cabin, which the elder was to share.  Richard Salton put his hands affectionately on the boy’s shoulders—though Adam was in his twenty-seventh year, he was a boy, and always would be, to his grand-uncle.

“I am so glad to find you as you are, my dear boy—just such a young man as I had always hoped for as a son, in the days when I still had such hopes.  However, that is all past.  But thank God there is a new life to begin for both of us.  To you must be the larger part—but there is still time for some of it to be shared in common.  I have waited till we should have seen each other to enter upon the subject; for I thought it better not to tie up your young life to my old one till we should have sufficient personal knowledge to justify such a venture.  Now I can, so far as I am concerned, enter into it freely, since from the moment my eyes rested on you I saw my son—as he shall be, God willing—if he chooses such a course himself.”

“Indeed I do, sir—with all my heart!”

“Thank you, Adam, for that.”  The old, man’s eyes filled and his voice trembled.  Then, after a long silence between them, he went on: “When I heard you were coming I made my will.  It was well that your interests should be protected from that moment on.  Here is the deed—keep it, Adam.  All I have shall belong to you; and if love and good wishes, or the memory of them, can make life sweeter, yours shall be a happy one.  Now, my dear boy, let us turn in.  We start early in the morning and have a long drive before us.  I hope you don’t mind driving?  I was going to have the old travelling carriage in which my grandfather, your great-grand-uncle, went to Court when William IV. was king.  It is all right—they built well in those days—and it has been kept in perfect order.  But I think I have done better: I have sent the carriage in which I travel myself.  The horses are of my own breeding, and relays of them shall take us all the way.  I hope you like horses?  They have long been one of my greatest interests in life.”

“I love them, sir, and I am happy to say I have many of my own.  My father gave me a horse farm for myself when I was eighteen.  I devoted myself to it, and it has gone on.  Before I came away, my steward gave me a memorandum that we have in my own place more than a thousand, nearly all good.”

“Just fancy what a delight it will be, sir, to see so much of England—and with you!”

“Thank you again, my boy.  I will tell you all about your future home and its surroundings as we go.  We shall travel in old-fashioned state, I tell you.  My grandfather always drove four-in-hand; and so shall we.”

“Oh, thanks, sir, thanks.  May I take the ribbons sometimes?”

“Whenever you choose, Adam.  The team is your own.  Every horse we use to-day is to be your own.”

“You are too generous, uncle!”

“Not at all.  Only an old man’s selfish pleasure.  It is not every day that an heir to the old home comes back.  And—oh, by the way . . . No, we had better turn in now—I shall tell you the rest in the morning.”