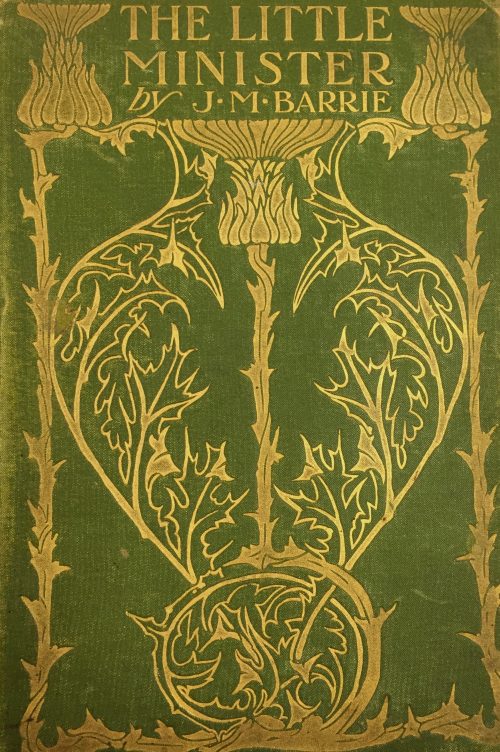 AUTHOR OF “WINDOW IN THRUMS,” “AULD LIGHT IDYLLS,” “WHEN A MAN’S SINGLE.” ETC. 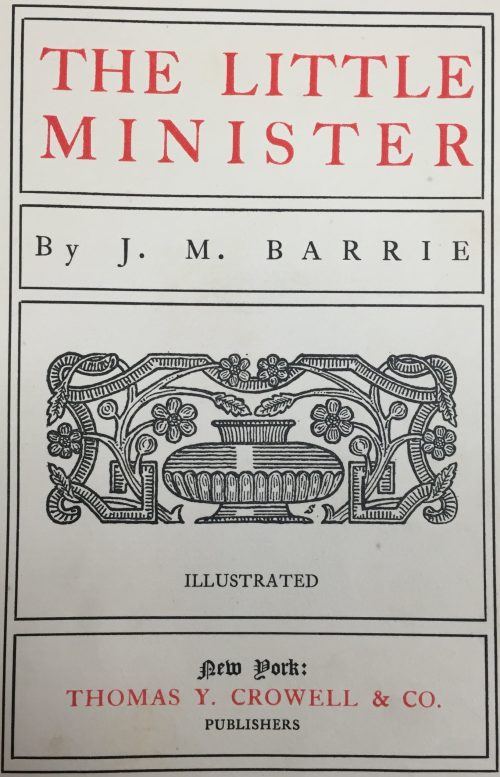 The Little Minister Chapter I. The Love-Light

Long ago, in the days when our caged blackbirds never saw a king’s soldier without whistling impudently, “Come ower the water to Charlie,” a minister of Thrums was to be married, but something happened, and he remained a bachelor. Then, when he was old, he passed in our square the lady who was to have been his wife, and her hair was white, but she, too, was still unmarried. The meeting had only one witness, a weaver, and he said solemnly afterwards, “They didna speak, but they just gave one another a look, and I saw the love-light in their een.” No more is remembered of these two, no being now living ever saw them, but the poetry that was in the soul of a battered weaver makes them human to us for ever.

It is of another minister I am to tell, but only to those who know that light when they see it. I am not bidding good-bye to many readers, for though it is true that some men, of whom Lord Rintoul was one, live to an old age without knowing love, few of us can have met them, and of women so incomplete I never heard.

Gavin Dishart was barely twenty-one when he and his mother came to Thrums, light-hearted like the traveller who knows not what awaits him at the bend of the road. It was the time of year when the ground is carpeted beneath the firs with brown needles, when split-nuts patter all day from the beech, and children lay yellow corn on the dominie’s desk to remind him that now they are needed in the fields. The day was so silent that carts could be heard rumbling a mile away. All Thrums was out in its wynds and closes— a few of the weavers still in knee-breeches—to look at the new Auld Licht minister. I was there too, the dominie of Glen Quharity, which is four miles from Thrums; and heavy was my heart as I stood afar off so that Gavin’s mother might not have the pain of seeing me. I was the only one in the crowd who looked at her more than at her son.

Eighteen years had passed since we parted. Already her hair had lost the brightness of its youth, and she seemed to me smaller and more fragile; and the face that I loved when I was a hobbledehoy, and loved when I looked once more upon it in Thrums, and always shall love till I die, was soft and worn. Margaret was an old woman, and she was only forty-three: and I am the man who made her old. As Gavin put his eager boyish face out at the carriage window, many saw that he was holding her hand, but none could be glad at the sight as the dominie was glad, looking on at a happiness in which he dared not mingle. Margaret was crying because she was so proud of her boy. Women do that. Poor sons to be proud of, good mothers, but I would not have you dry those tears.

When the little minister looked out at the carriage window, many of the people drew back humbly, but a little boy in a red frock with black spots pressed forward and offered him a sticky parly, which Gavin accepted, though not without a tremor, for children were more terrible to him then than bearded men. The boy’s mother, trying not to look elated, bore him away, but her face said that he was made for life. With this little incident Gavin’s career in Thrums began. I remembered it suddenly the other day when wading across the wynd where it took place. Many scenes in the little minister’s life come back to me in this way. The first time I ever thought of writing his love story as an old man’s gift to a little maid since grown tall, was one night while I sat alone in the school-house; on my knees a fiddle that has been my only living companion since I sold my hens. My mind had drifted back to the first time I saw Gavin and the Egyptian together, and what set it wandering to that midnight meeting was my garden gate shaking in the wind. At a gate on the hill I had first encountered these two. It rattled in his hand, and I looked up and saw them, and neither knew why I had such cause to start at the sight. Then the gate swung to. It had just such a click as mine.

These two figures on the hill are more real to me than things that happened yesterday, but I do not know that I can make them live to others. A ghost-show used to come yearly to Thrums on the merry Muckle Friday, in which the illusion was contrived by hanging a glass between the onlookers and the stage. I cannot deny that the comings and goings of the ghost were highly diverting, yet the farmer of T’nowhead only laughed because he had paid his money at the hole in the door like the rest of us. T’nowhead sat at the end of a form where he saw round the glass and so saw no ghost. I fear my public may be in the same predicament. I see the little minister as he was at one-and-twenty, and the little girl to whom this story is to belong sees him, though the things I have to tell happened before she came into the world. But there are reasons why she should see; and I do not know that I can provide the glass for others. If they see round it, they will neither laugh nor cry with Gavin and Babbie.

When Gavin came to Thrums he was as I am now, for the pages lay before him on which he was to write his life. Yet he was not quite as I am. The life of every man is a diary in which he means to write one story, and writes another; and his humblest hour is when he compares the volume as it is with what he vowed to make it. But the biographer sees the last chapter while he is still at the first, and I have only to write over with ink what Gavin has written in pencil.

How often is it a phanton woman who draws the man from the way he meant to go? So was man created, to hunger for the ideal that is above himself, until one day there is magic in the air, and the eyes of a girl rest upon him. He does not know that it is he himself who crowned her, and if the girl is as pure as he, their love is the one form of idolatry that is not quite ignoble. It is the joining of two souls on their way to God. But if the woman be bad, the test of the man is when he wakens from his dream. The nobler his ideal, the further will he have been hurried down the wrong way, for those who only run after little things will not go far. His love may now sink into passion, perhaps only to stain its wings and rise again, perhaps to drown.

Babbie, what shall I say of you who make me write these things? I am not your judge. Shall we not laugh at the student who chafes when between him and his book comes the song of the thrushes, with whom, on the mad night you danced into Gavin’s life, you had more in common than with Auld Licht ministers? The gladness of living was in your step, your voice was melody, and he was wondering what love might be.

You were the daughter of a summer night, born where all the birds are free, and the moon christened you with her soft light to dazzle the eyes of man. Not our little minister alone was stricken by you into his second childhood. To look upon you was to rejoice that so fair a thing could be; to think of you is still to be young. Even those who called you a little devil, of whom I have been one, admitted that in the end you had a soul, though not that you had been born with one. They said you stole it, and so made a woman of yourself. But again I say I am not your judge, and when I picture you as Gavin saw you first, a bare-legged witch dancing up Windyghoul, rowan berries in your black hair, and on your finger a jewel the little minister could not have bought with five years of toil, the shadows on my pages lift, and I cannot wonder that Gavin loved you.

Often I say to myself that this is to be Gavin’s story, not mine. Yet must it be mine too, in a manner, and of myself I shall sometimes have to speak; not willingly, for it is time my little tragedy had died of old age. I have kept it to myself so long that now I would stand at its grave alone. It is true that when I heard who was to be the new minister I hoped for a day that the life broken in Harvie might be mended in Thrums, but two minutes’ talk with Gavin showed me that Margaret had kept from him the secret which was hers and mine and so knocked the bottom out of my vain hopes. I did not blame her then, nor do I blame her now, nor shall anyone who blames her ever be called friend by me; but it was bitter to look at the white manse among the trees and know that I must never enter it. For Margaret’s sake I had to keep aloof, yet this new trial came upon me like our parting at Harvie. I thought that in those eighteen years my passions had burned like a ship till they sank, but I suffered again as on that awful night when Adam Dishart came back, nearly killing Margaret and tearing up all my ambitions by the root in a single hour. I waited in Thrums until I had looked again on Margaret, who thought me dead, and Gavin, who had never heard of me, and then I trudged back to the school-house. Something I heard of them from time to time during the winter—for in the gossip of Thrums I was well posted—but much of what is to be told here I only learned afterwards from those who knew it best. Gavin heard of me at times as the dominie in the glen who had ceased to attend the Auld Licht kirk, and Margaret did not even hear of me. It was all I could do for them.

The Little Minister Chapter II. Runs Alongside the Making of a Minister