I was following the Vice-Warden, but, on second thoughts, went after my Lady, being curious to see how she would manage to keep the children out of sight.

I found her holding Sylvie’s hand, and with her other hand stroking Bruno’s hair in a most tender and motherly fashion: both children were looking bewildered and half-frightened.

“My own darlings,” she was saying, “I’ve been planning a little treat for you! The Professor shall take you a long walk into the woods this beautiful evening: and you shall take a basket of food with you, and have a little picnic down by the river!”

Bruno jumped, and clapped his hands. “That are nice!” he cried. “Aren’t it, Sylvie?”

Sylvie, who hadn’t quite lost her surprised look, put up her mouth for a kiss. “Thank you very much,” she said earnestly.

My Lady turned her head away to conceal the broad grin of triumph that spread over her vast face, like a ripple on a lake. “Little simpletons!” she muttered to herself, as she marched up to the house. I followed her in.

“Quite so, your Excellency,” the Baron was saying as we entered the Library. “All the infantry were under my command.” He turned, and was duly presented to my Lady.

“A military hero?” said my Lady. The fat little man simpered. “Well, yes,” he replied, modestly casting down his eyes. “My ancestors were all famous for military genius.”

My Lady smiled graciously. “It often runs in families,” she remarked: “just as a love for pastry does.”

The Baron looked slightly offended, and the Vice-Warden discreetly changed the subject. “Dinner will soon be ready,” he said. “May I have the honour of conducting your Adiposity to the guest-chamber?”

“Certainly, certainly!” the Baron eagerly assented. “It would never do to keep dinner waiting!” And he almost trotted out of the room after the Vice-Warden.

He was back again so speedily that the Vice-Warden had barely time to explain to my Lady that her remark about “a love for pastry” was “unfortunate. You might have seen, with half an eye,” he added, “that that’s his line. Military genius, indeed! Pooh!”

“Dinner ready yet?” the Baron enquired, as he hurried into the room.

“Will be in a few minutes,” the Vice-Warden replied. “Meanwhile, let’s take a turn in the garden. You were telling me,” he continued, as the trio left the house, “something about a great battle in which you had the command of the infantry——”

“True,” said the Baron. “The enemy, as I was saying, far outnumbered us: but I marched my men right into the middle of—what’s that?” the Military Hero exclaimed in agitated tones, drawing back behind the Vice-Warden, as a strange creature rushed wildly upon them, brandishing a spade.

“It’s only the Gardener!” the Vice-Warden replied in an encouraging tone. “Quite harmless, I assure you. Hark, he’s singing! It’s his favorite amusement.”

And once more those shrill discordant tones rang out:—

“He thought he saw a Banker’s Clerk
Descending from the bus:
He looked again, and found it was
A Hippopotamus:
‘If this should stay to dine,’ he said,
‘There won’t be much for us!'”

Throwing away the spade, he broke into a frantic jig, snapping his fingers, and repeating, again and again 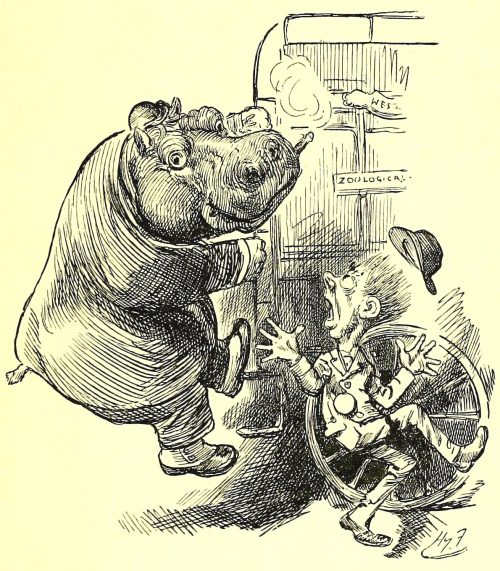 It Was A Hippopotamus

Once more the Baron looked slightly offended, but the Vice-Warden hastily explained that the song had no allusion to him, and in fact had no meaning at all. “You didn’t mean anything by it, now did you?” He appealed to the Gardener, who had finished his song, and stood, balancing himself on one leg, and looking at them, with his mouth open.

“I never means nothing,” said the Gardener: and Uggug luckily came up at the moment, and gave the conversation a new turn.

“Allow me to present my son,” said the Vice-Warden; adding, in a whisper, “one of the best and cleverest boys that ever lived! I’ll contrive for you to see some of his cleverness. He knows everything that other boys don’t know; and in archery, in fishing, in painting, and in music, his skill is—but you shall judge for yourself. You see that target over there? He shall shoot an arrow at it. Dear boy,” he went on aloud, “his Adiposity would like to see you shoot. Bring his Highness’ bow and arrows!”

Uggug looked very sulky as he received the bow and arrow, and prepared to shoot. Just as the arrow left the bow, the Vice-Warden trod heavily on the toe of the Baron, who yelled with the pain.

“Ten thousand pardons!” he exclaimed. “I stepped back in my excitement. See! It is a bull’s-eye!”

The Baron gazed in astonishment. “He held the bow so awkwardly, it seemed impossible!” he muttered. But there was no room for doubt: there was the arrow, right in the centre of the bull’s-eye!

“The lake is close by,” continued the Vice-Warden. “Bring his Highness’ fishing-rod!” And Uggug most unwillingly held the rod, and dangled the fly over the water.

“A beetle on your arm!” cried my Lady, pinching the poor Baron’s arm worse than if ten lobsters had seized it at once. “That kind is poisonous,” she explained. “But what a pity! You missed seeing the fish pulled out!”

An enormous dead cod-fish was lying on the bank, with the hook in its mouth.

“I had always fancied,” the Baron faltered, “that cod were salt-water fish?”

“Not in this country,” said the Vice-Warden. “Shall we go in? Ask my son some question on the way—any subject you like!” And the sulky boy was violently shoved forwards, to walk at the Baron’s side.

“Could your Highness tell me,” the Baron cautiously began, “how much seven times nine would come to?”

“Turn to the left!” cried the Vice-Warden, hastily stepping forwards to show the way—so hastily, that he ran against his unfortunate guest, who fell heavily on his face.

“So sorry!” my Lady exclaimed, as she and her husband helped him to his feet again. “My son was in the act of saying ‘sixty-three’ as you fell!”

The Baron said nothing: he was covered with dust, and seemed much hurt, both in body and mind. However, when they had got him into the house, and given him a good brushing, matters looked a little better.

Dinner was served in due course, and every fresh dish seemed to increase the good-humour of the Baron: but all efforts, to get him to express his opinion as to Uggug’s cleverness, were in vain, until that interesting youth had left the room, and was seen from the open window, prowling about the lawn with a little basket, which he was filling with frogs.

“So fond of Natural History as he is, dear boy!” said the doting mother. “Now do tell us, Baron, what you think of him!”

“To be perfectly candid,” said the cautious Baron, “I would like a little more evidence. I think you mentioned his skill in——”

“Music?” said the Vice-Warden. “Why, he’s simply a prodigy! You shall hear him play the piano.” And he walked to the window. “Ug——I mean my boy! Come in for a minute, and bring the music-master with you! To turn over the music for him,” he added as an explanation.

Uggug, having filled his basket with frogs, had no objection to obey, and soon appeared in the room, followed by a fierce-looking little man, who asked the Vice-Warden “Vot music vill you haf?”

“The Sonata that His Highness plays so charmingly,” said the Vice-Warden.

“His Highness haf not——” the music-master began, but was sharply stopped by the Vice-Warden.

“Silence, Sir! Go and turn over the music for his Highness. My dear,” (to the Wardeness) “will you show him what to do? And meanwhile, Baron, I’ll just show you a most interesting map we have—of Outland, and Fairyland, and that sort of thing.” 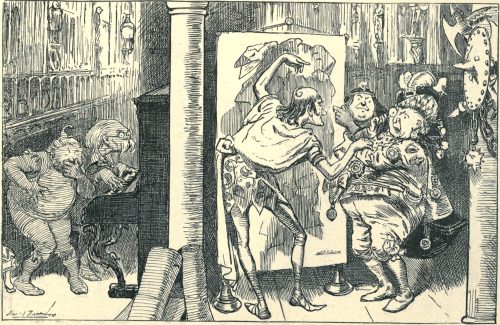 The Map Of Fairyland

By the time my Lady had returned, from explaining things to the music-master, the map had been hung up, and the Baron was already much bewildered by the Vice-Warden’s habit of pointing to one place while he shouted out the name of another.

My Lady joining in, pointing out other places, and shouting other names, only made matters worse; and at last the Baron, in despair, took to pointing out places for himself, and feebly asked “Is that great yellow splotch Fairyland?”

“Yes, that’s Fairyland,” said the Vice-Warden: “and you might as well give him a hint,” he muttered to my Lady, “about going back to-morrow. He eats like a shark! It would hardly do for me to mention it.”

His wife caught the idea, and at once began giving hints of the most subtle and delicate kind. “Just see what a short way it is back to Fairyland! Why, if you started to-morrow morning, you’d get there in very little more than a week!”

The Baron looked incredulous. “It took me a full month to come,” he said.

“But it’s ever so much shorter, going back, you know!”

The Baron looked appealingly to the Vice-Warden, who chimed in readily. “You can go back five times, in the time it took you to come here once—if you start to-morrow morning!”

All this time the Sonata was pealing through the room. The Baron could not help admitting to himself that it was being magnificently played: but he tried in vain to get a glimpse of the youthful performer. Every time he had nearly succeeded in catching sight of him, either the Vice-Warden or his wife was sure to get in the way, pointing out some new place on the map, and deafening him with some new name.

He gave in at last, wished a hasty good-night, and left the room, while his host and hostess interchanged looks of triumph.

“Deftly done!” cried the Vice-Warden. “Craftily contrived! But what means all that tramping on the stairs?” He half-opened the door, looked out, and added in a tone of dismay, “The Baron’s boxes are being carried down!”

“And what means all that rumbling of wheels?” cried my Lady. She peeped through the window curtains. “The Baron’s carriage has come round!” she groaned.

At this moment the door opened: a fat, furious face looked in: a voice, hoarse with passion, thundered out the words “My room is full of frogs—I leave you!”: and the door closed again.

And still the noble Sonata went pealing through the room: but it was Arthur’s masterly touch that roused the echoes, and thrilled my very soul with the tender music of the immortal ‘Sonata Pathetique’: and it was not till the last note had died away that the tired but happy traveler could bring himself to utter the words “good-night!” and to seek his much-needed pillow.

Sylvie and Bruno Chapter VIII. A Ride on A Lion