As we entered the breakfast-saloon, the Professor was saying “—and he had breakfast by himself, early: so he begged you wouldn’t wait for him, my Lady. This way, my Lady,” he added, “this way!” And then, with (as it seemed to me) most superfluous politeness, he flung open the door of my compartment, and ushered in “—a young and lovely lady!” I muttered to myself with some bitterness. “And this is, of course, the opening scene of Vol. I. She is the Heroine. And I am one of those subordinate characters that only turn up when needed for the development of her destiny, and whose final appearance is outside the church, waiting to greet the Happy Pair!”

“Yes, my Lady, change at Fayfield,” were the next words I heard (oh that too obsequious Guard!), “next station but one.” And the door closed, and the lady settled down into her corner, and the monotonous throb of the engine (making one feel as if the train were some gigantic monster, whose very circulation we could feel) proclaimed that we were once more speeding on our way. “The lady had a perfectly formed nose,” I caught myself saying to myself, “hazel eyes, and lips——” and here it occurred to me that to see, for myself, what “the lady” was really like, would be more satisfactory than much speculation.

I looked round cautiously, and—was entirely disappointed of my hope. The veil, which shrouded her whole face, was too thick for me to see more than the glitter of bright eyes and the hazy outline of what might be a lovely oval face, but might also, unfortunately, be an equally unlovely one. I closed my eyes again, saying to myself “—couldn’t have a better chance for an experiment in Telepathy! I’ll think out her face, and afterwards test the portrait with the original.”

At first, no result at all crowned my efforts, though I ‘divided my swift mind,’ now hither, now thither, in a way that I felt sure would have made Æneas green with envy: but the dimly-seen oval remained as provokingly blank as ever—a mere Ellipse, as if in some mathematical diagram, without even the Foci that might be made to do duty as a nose and a mouth. Gradually, however, the conviction came upon me that I could, by a certain concentration of thought, think the veil away, and so get a glimpse of the mysterious face—as to which the two questions, “is she pretty?” and “is she plain?”, still hung suspended, in my mind, in beautiful equipoise.

Success was partial—and fitful—still there was a result: ever and anon, the veil seemed to vanish, in a sudden flash of light: but, before I could fully realise the face, all was dark again. In each such glimpse, the face seemed to grow more childish and more innocent: and, when I had at last thought the veil entirely away, it was, unmistakeably, the sweet face of little Sylvie!

“So, either I’ve been dreaming about Sylvie,” I said to myself, “and this is the reality. Or else I’ve really been with Sylvie, and this is a dream! Is Life itself a dream, I wonder?”

To occupy the time, I got out the letter, which had caused me to take this sudden railway-journey from my London home down to a strange fishing-town on the North coast, and read it over again:—

“I’m sure it will be as great a pleasure to me, as it can possibly be to you, to meet once more after so many years: and of course I shall be ready to give you all the benefit of such medical skill as I have: only, you know, one mustn’t violate professional etiquette! And you are already in the hands of a first-rate London doctor, with whom it would be utter affectation for me to pretend to compete. (I make no doubt he is right in saying the heart is affected: all your symptoms point that way.) One thing, at any rate, I have already done in my doctorial capacity—secured you a bedroom on the ground-floor, so that you will not need to ascend the stairs at all.

“I shall expect you by last train on Friday, in accordance with your letter: and, till then, I shall say, in the words of the old song, ‘Oh for Friday nicht! Friday’s lang a-coming!’

This Postscript puzzled me sorely. “He is far too sensible a man,” I thought, “to have become a Fatalist. And yet what else can he mean by it?” And, as I folded up the letter and put it away, I inadvertently repeated the words aloud. “Do you believe in Fate?”

The fair ‘Incognita’ turned her head quickly at the sudden question. “No, I don’t!” she said with a smile. “Do you?”

“I—I didn’t mean to ask the question!” I stammered, a little taken aback at having begun a conversation in so unconventional a fashion.

The lady’s smile became a laugh—not a mocking laugh, but the laugh of a happy child who is perfectly at her ease. “Didn’t you?” she said. “Then it was a case of what you Doctors call ‘unconscious cerebration’?”

She pointed to the book I had been reading, which was so lying that its title, “Diseases of the Heart,” was plainly visible.

“One needn’t be a Doctor,” I said, “to take an interest in medical books. There’s another class of readers, who are yet more deeply interested——”

“You mean the Patients?” she interrupted, while a look of tender pity gave new sweetness to her face. “But,” with an evident wish to avoid a possibly painful topic, “one needn’t be either, to take an interest in books of Science. Which contain the greatest amount of Science, do you think, the books, or the minds?”

“Rather a profound question for a lady!” I said to myself, holding, with the conceit so natural to Man, that Woman’s intellect is essentially shallow. And I considered a minute before replying. “If you mean living minds, I don’t think it’s possible to decide. There is so much written Science that no living person has ever read: and there is so much thought-out Science that hasn’t yet been written. But, if you mean the whole human race, then I think the minds have it: everything, recorded in books, must have once been in some mind, you know.”

“Isn’t that rather like one of the Rules in Algebra?” my Lady enquired. (“Algebra too!” I thought with increasing wonder.) “I mean, if we consider thoughts as factors, may we not say that the Least Common Multiple of all the minds contains that of all the books; but not the other way?”

“Certainly we may!” I replied, delighted with the illustration. “And what a grand thing it would be,” I went on dreamily, thinking aloud rather than talking, “if we could only apply that Rule to books! You know, in finding the Least Common Multiple, we strike out a quantity wherever it occurs, except in the term where it is raised to its highest power. So we should have to erase every recorded thought, except in the sentence where it is expressed with the greatest intensity.”

My Lady laughed merrily. “Some books would be reduced to blank paper, I’m afraid!” she said.

“They would. Most libraries would be terribly diminished in bulk. But just think what they would gain in quality!”

“When will it be done?” she eagerly asked. “If there’s any chance of it in my time, I think I’ll leave off reading, and wait for it!”

“Well, perhaps in another thousand years or so——”

“Anywhere but by me!” growled the Sub-Warden. “The little wretch always manages to upset his coffee!”

I guessed at once (as perhaps the reader will also have guessed, if, like myself, he is very clever at drawing conclusions) that my Lady was the Sub-Warden’s wife, and that Uggug (a hideous fat boy, about the same age as Sylvie, with the expression of a prize-pig) was their son. Sylvie and Bruno, with the Lord Chancellor, made up a party of seven. 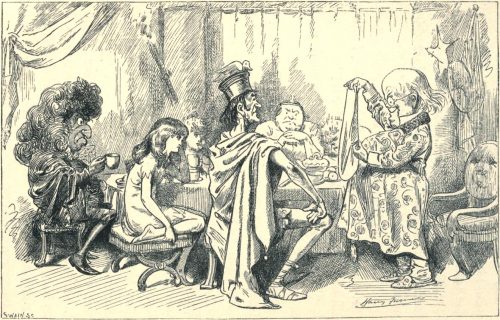 “And you actually got a plunge-bath every morning?” said the Sub-Warden, seemingly in continuation of a conversation with the Professor. “Even at the little roadside-inns?”

“Oh, certainly, certainly!” the Professor replied with a smile on his jolly face. “Allow me to explain. It is, in fact, a very simple problem in Hydrodynamics. (That means a combination of Water and Strength.) If we take a plunge-bath, and a man of great strength (such as myself) about to plunge into it, we have a perfect example of this science. I am bound to admit,” the Professor continued, in a lower tone and with downcast eyes, “that we need a man of remarkable strength. He must be able to spring from the floor to about twice his own height, gradually turning over as he rises, so as to come down again head first.”

“Why, you need a flea, not a man!” exclaimed the Sub-Warden.

“Pardon me,” said the Professor. “This particular kind of bath is not adapted for a flea. Let us suppose,” he continued, folding his table-napkin into a graceful festoon, “that this represents what is perhaps the necessity of this Age—the Active Tourist’s Portable Bath. You may describe it briefly, if you like,” looking at the Chancellor, “by the letters A. T. P. B.”

The Chancellor, much disconcerted at finding everybody looking at him, could only murmur, in a shy whisper, “Precisely so!”

“One great advantage of this plunge-bath,” continued the Professor, “is that it requires only half-a-gallon of water——”

“I don’t call it a plunge-bath,” His Sub-Excellency remarked, “unless your Active Tourist goes right under!”

“But he does go right under,” the old man gently replied. “The A. T. hangs up the P. B. on a nail—thus. He then empties the water-jug into it—places the empty jug below the bag—leaps into the air—descends head-first into the bag—the water rises round him to the top of the bag—and there you are!” he triumphantly concluded. “The A. T. is as much under water as if he’d gone a mile or two down into the Atlantic!”

“And he’s drowned, let us say, in about four minutes——”

“By no means!” the Professor answered with a proud smile. “After about a minute, he quietly turns a tap at the lower end of the P. B.—all the water runs back into the jug—and there you are again!”

“But how in the world is he to get out of the bag again?”

“That, I take it,” said the Professor, “is the most beautiful part of the whole invention. All the way up the P. B., inside, are loops for the thumbs; so it’s something like going up-stairs, only perhaps less comfortable; and, by the time the A. T. has risen out of the bag, all but his head, he’s sure to topple over, one way or the other—the Law of Gravity secures that. And there he is on the floor again!”

“Well, yes, a little bruised; but having had his plunge-bath: that’s the great thing.”

“Wonderful! It’s almost beyond belief!” murmured the Sub-Warden. The Professor took it as a compliment, and bowed with a gratified smile.

“Quite beyond belief!” my Lady added—meaning, no doubt, to be more complimentary still. The Professor bowed, but he didn’t smile this time.

“I can assure you,” he said earnestly, “that, provided the bath was made, I used it every morning. I certainly ordered it—that I am clear about—my only doubt is, whether the man ever finished making it. It’s difficult to remember, after so many years——”

At this moment the door, very slowly and creakingly, began to open, and Sylvie and Bruno jumped up, and ran to meet the well-known footstep.