The Marvellous—the Mysterious—had quite passed out of my life for the moment: and the Common-place reigned supreme. I turned in the direction of the Earl’s house, as it was now ‘the witching hour’ of five, and I knew I should find them ready for a cup of tea and a quiet chat.

Lady Muriel and her father gave me a delightfully warm welcome. They were not of the folk we meet in fashionable drawing-rooms—who conceal all such feelings as they may chance to possess beneath the impenetrable mask of a conventional placidity. ‘The Man with the Iron Mask’ was, no doubt, a rarity and a marvel in his own age: in modern London no one would turn his head to give him a second look! No, these were real people. When they looked pleased, it meant that they were pleased: and when Lady Muriel said, with a bright smile, “I’m very glad to see you again!”, I knew that it was true.

Still I did not venture to disobey the injunctions—crazy as I felt them to be—of the love-sick young Doctor, by so much as alluding to his existence: and it was only after they had given me full details of a projected picnic, to which they invited me, that Lady Muriel exclaimed, almost as an after-thought, “and do, if you can, bring Doctor Forester with you! I’m sure a day in the country would do him good. I’m afraid he studies too much——”

It was ‘on the tip of my tongue’ to quote the words “His only books are woman’s looks!” but I checked myself just in time—with something of the feeling of one who has crossed a street, and has been all but run over by a passing ‘Hansom.’

“—and I think he has too lonely a life,” she went on, with a gentle earnestness that left no room whatever to suspect a double meaning. “Do get him to come! And don’t forget the day, Tuesday week. We can drive you over. It would be a pity to go by rail—there is so much pretty scenery on the road. And our open carriage just holds four.”

“Oh, I’ll persuade him to come!” I said with confidence—thinking “it would take all my powers of persuasion to keep him away!”

The picnic was to take place in ten days: and though Arthur readily accepted the invitation I brought him, nothing that I could say would induce him to call—either with me or without me—on the Earl and his daughter in the meanwhile. No: he feared to “wear out his welcome,” he said: they had “seen enough of him for one while”: and, when at last the day for the expedition arrived, he was so childishly nervous and uneasy that I thought it best so to arrange our plans that we should go separately to the house—my intention being to arrive some time after him, so as to give him time to get over a meeting.

With this object I purposely made a considerable circuit on my way to the Hall (as we called the Earl’s house): “and if I could only manage to lose my way a bit,” I thought to myself, “that would suit me capitally!”

In this I succeeded better, and sooner, than I had ventured to hope for. The path through the wood had been made familiar to me, by many a solitary stroll, in my former visit to Elveston; and how I could have so suddenly and so entirely lost it—even though I was so engrossed in thinking of Arthur and his lady-love that I heeded little else—was a mystery to me. “And this open place,” I said to myself, “seems to have some memory about it I cannot distinctly recall—surely it is the very spot where I saw those Fairy-Children! But I hope there are no snakes about!” I mused aloud, taking my seat on a fallen tree. “I certainly do not like snakes—and I don’t suppose Bruno likes them, either!”

Words fail me to describe the beauty of the little group—couched on a patch of moss, on the trunk of the fallen tree, that met my eager gaze: Sylvie reclining with her elbow buried in the moss, and her rosy cheek resting in the palm of her hand, and Bruno stretched at her feet with his head in her lap. 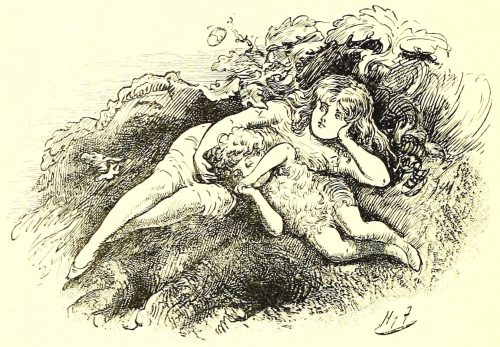 “Too waggly?” was all I could say in so sudden an emergency.

“I’m not praticular,” Bruno said, carelessly: “but I do like straight animals best——”

“But you like a dog when it wags its tail,” Sylvie interrupted. “You know you do, Bruno!”

“But there’s more of a dog, isn’t there, Mister Sir?” Bruno appealed to me. “You wouldn’t like to have a dog if it hadn’t got nuffin but a head and a tail?”

I admitted that a dog of that kind would be uninteresting.

“There isn’t such a dog as that,” Sylvie thoughtfully remarked.

“But there would be,” cried Bruno, “if the Professor shortened it up for us!”

“He’s got a curious machine——” Sylvie was beginning to explain.

“A welly curious machine,” Bruno broke in, not at all willing to have the story thus taken out of his mouth, “and if oo puts in—somefinoruvver—at one end, oo know—and he turns the handle—and it comes out at the uvver end, oh, ever so short!”

“As short as short!” Sylvie echoed.

“And one day—when we was in Outland, oo know—before we came to Fairyland—me and Sylvie took him a big Crocodile. And he shortened it up for us. And it did look so funny! And it kept looking round, and saying ‘wherever is the rest of me got to?’ And then its eyes looked unhappy——”

“Not both its eyes,” Sylvie interrupted.

“How short was the crocodile?” I asked, as the story was getting a little complicated.

“Half as short again as when we caught it—so long,” said Bruno, spreading out his arms to their full stretch.

I tried to calculate what this would come to, but it was too hard for me. Please make it out for me, dear Child who reads this!

“But you didn’t leave the poor thing so short as that, did you?”

“Well, no. Sylvie and me took it back again and we got it stretched to—to—how much was it, Sylvie?”

“Two times and a half, and a little bit more,” said Sylvie.

“It wouldn’t like that better than the other way, I’m afraid?”

“Oh, but it did though!” Bruno put in eagerly. “It were proud of its new tail! Oo never saw a Crocodile so proud! Why, it could go round and walk on the top of its tail, and along its back, all the way to its head!”

This was a good deal worse than the last puzzle. Please, dear Child, help again!

“I don’t believe no Crocodile never walked along its own forehead!” Sylvie cried, too much excited by the controversy to limit the number of her negatives.

“Oo don’t know the reason why it did it!” Bruno scornfully retorted. “It had a welly good reason. I heerd it say ‘Why shouldn’t I walk on my own forehead?’ So a course it did, oo know!”

“Shall, in a minute,” said Bruno: “soon as we’ve done talking. Only two peoples ca’n’t talk comfably togevver, when one’s getting up a tree, and the other isn’t!”

It appeared to me that a conversation would scarcely be ‘comfable’ while trees were being climbed, even if both the ‘peoples’ were doing it: but it was evidently dangerous to oppose any theory of Bruno’s; so I thought it best to let the question drop, and to ask for an account of the machine that made things longer.

This time Bruno was at a loss, and left it to Sylvie. “It’s like a mangle,” she said: “if things are put in, they get squoze——”

“Yes.” Sylvie accepted the correction, but did not attempt to pronounce the word, which was evidently new to her. “They get—like that—and they come out, oh, ever so long!”

“Once,” Bruno began again, “Sylvie and me writed——”

“Well, we wroted a Nursery-Song, and the Professor mangled it longer for us. It were ‘There was a little Man, And he had a little gun, And the bullets——‘”

“I know the rest,” I interrupted. “But would you say it long—I mean the way that it came out of the mangle?”

“We’ll get the Professor to sing it for you,” said Sylvie. “It would spoil it to say it.”

“I would like to meet the Professor,” I said. “And I would like to take you all with me, to see some friends of mine, that live near here. Would you like to come?”

“I don’t think the Professor would like to come,” said Sylvie. “He’s very shy. But we’d like it very much. Only we’d better not come this size, you know.”

The difficulty had occurred to me already: and I had felt that perhaps there would be a slight awkwardness in introducing two such tiny friends into Society. “What size will you be?” I enquired.

“Could you come to-day?” I said, thinking “then we could have you at the picnic!”

Sylvie considered a little. “Not to-day,” she replied. “We haven’t got the things ready. We’ll come on—Tuesday next, if you like. And now, really, Bruno, you must come and do your lessons.”

“I wiss oo wouldn’t say ‘really Bruno!'” the little fellow pleaded, with pouting lips that made him look prettier than ever. “It always shows there’s something horrid coming! And I won’t kiss you, if you’re so unkind.”

“Ah, but you have kissed me!” Sylvie exclaimed in merry triumph.

“Well then, I’ll unkiss you!” And he threw his arms round her neck for this novel, but apparently not very painful, operation.

“It’s very like kissing!” Sylvie remarked, as soon as her lips were again free for speech.

“Oo don’t know nuffin about it! It were just the conkery!” Bruno replied with much severity, as he marched away.

Sylvie turned her laughing face to me. “Shall we come on Tuesday?” she said.

“Very well,” I said: “let it be Tuesday next. But where is the Professor? Did he come with you to Fairyland?”

“No,” said Sylvie. “But he promised he’d come and see us, some day. He’s getting his Lecture ready. So he has to stay at home.”

“At home?” I said dreamily, not feeling quite sure what she had said.

“Yes, Sir. His Lordship and Lady Muriel are at home. Please to walk this way.”