Chin Music : Snowbound – The Record of a Theatrical Touring Party by Bram Stoker 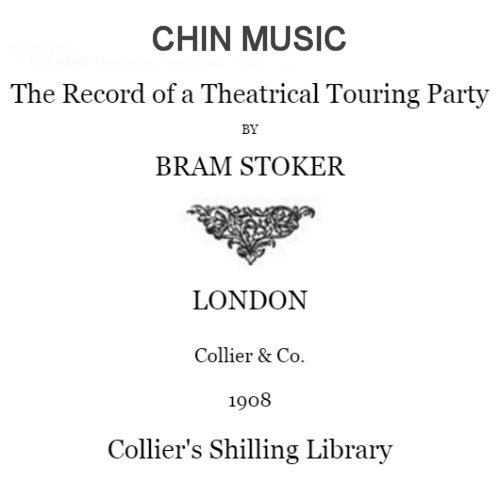 ‘One night we were journeying in the west of the Rockies over a road bed which threatened to jerk out our teeth with every loosely-laid sleeper on the line.

‘Travelling in that part of the world, certainly in the days I speak of, was pretty hard. The travellers were mostly men, all over-worked, all over-anxious, and intolerant of anything which hindered their work or interfered with the measure of their repose. In night journeys the berths in the sleeping cars were made up early, and as all the night trains were sleeping cars, the only thing to be done was to turn in at once and try and sleep away the time. As most of us were tired out with the day’s work, the arrangement suited everybody.

‘The weather was harsh; sneezing and coughing was the order of the day. This made the people in the sleeper, all men, irritable: all the more that as most of them were contributing to the general chorus of sounds coming muffled through quilts and curtains, it was impossible to single out any special offender for general execration. After a while, however, the change of posture from standing or sitting to lying down began to have some kind of soothing effect, and new sounds of occasional snoring began to vary the monotony of irritation. Presently the train stopped at a way station; then ensued a prolonged spell of shunting backwards and forwards with the uncertainty of jerkiness which is so peculiarly disturbing to imperfect sleep; and then two newcomers entered the sleeper, a man and a baby. The baby was young, quite young enough to be defiantly ignorant and intolerant of all rules and regulations regarding the common good. It played for its own hand alone, and as it was extremely angry and gifted with exceptionally powerful lungs, the fact of its presence and its emotional condition, even though the latter afforded a mystery as to its cause, were immediately apparent. The snoring ceased, and its place was taken by muttered grunts and growls; the coughing seemed to increase with the renewed irritation, and everywhere was the rustling of ill-at-ease and impotent humanity. Curtains were pulled angrily aside, the rings shrieking viciously on the brass rods, and faces with bent brows and gleaming eyes and hardening mouths glared savagely at the intruder on our quiet, for so we now had tardily come to consider by comparison him and it. The newcomer did not seem to take the least notice of anything, but went on in a stolid way trying to quiet the child, shifting it from one arm to the other, dandling it up and down, and rocking it sideways.

‘I took considerable amusement, myself, from the annoyance of my fellow-passengers. I had no cold myself, and so had been worried by their discomforting sounds; besides, I had come to the car from a dinner with clients, where the wine of the country had circulated with quite sufficient freedom. When a man has a large family – I regret to say that at that time my first wife was nursing her seventh – he acquires a certain indifference to infantile querulousness. As a matter of fact, he does not feel sympathy with the child at all, his pity being reserved for other people.

‘All babies are malignant; the natural wickedness of man, as elaborated at the primeval curse, seems to find an unadulterated effect in their expressions of feeling.

‘I confess that the sight of a child crying, and especially crying angrily – unless, of course, it disturbs me in anything I may be doing – affords me a pleasure which is at once philosophical, humorous, contemplative, reminiscent and speculative.’

‘Oh, Mr Hemans, how horrid you are to say such things!’ said the Leading Lady. ‘You know you don’t think anything of the kind. There’s no one who loves little children better than you do, or who is so considerate to them!’ He made no reply, but only held up a hand in protest, smiling sweetly as he resumed:

‘This baby was a peculiarly fine specimen of its class. It seemed to have no compunction whatever, no parental respect, no natural affection, no mitigation in the natural virulence of its rancour. It screamed, it roared, it squalled, it bellowed. The root ideas of profanity, of obscenity, of blasphemy were mingled in its tone. It beat with clenched fist its father’s face, it clawed at his eyes with twitching fingers, it used its head as an engine with which to buffet him. It kicked, it struggled, it wriggled, it writhed, it twisted itself into serpentine convolutions, till every now and then, what with its vocal and muscular exertions, it threatened to get black in the face. All the time the stolid father simply tried to keep it quiet with eternal changes of posture and with whispered words, “There, now, pet!” “Hush! lie still, little one.” “Rest, dear one, rest!” He was a big, lanky, patient-looking, angular man with great rough hands and enormous feet, which he shifted about as he spoke; so that man and child together seemed eternally restless.

‘The thing appeared to have a sort of fascination for most of the men in the car. The curtains of a lot of berths were opened, and a lot of heads appeared, all scowling. I chuckled softly to myself, and tried to conceal my merriment, lest I should spoil the fun. No one said anything for a long time, till at last one wild-eyed, swarthy, long-bearded individual, who somehow looked like a Mormon Elder, said:

‘”Say, mister! What kind of howling-piece is it you have got there? Have none of you boys got a gun?”

‘There came from the bunks a regular chorus of acquiescence: “The durned thing had ought to be killed!”

‘”Never mind, boys, it may be a blessin’ in disguise. Somethin’ bad is comin’ to us on this trip, an’ arter this ’twill be easy work to die!”

‘The man spoke up:

‘”I’m sorry, gentlemen, if she incommodes you!” The words were so manifestly inadequate that there was a roar of laughter which seemed to shake the car. West of the Mississippi things are, or at any rate they used to be, a bit rough, and ideas followed suit. Laughter, when it came, was rough and coarse, and on this occasion even the lanky man seemed to feel it. He only tried to hold the child closer to him, as if to shield it from the hail of ironical chaff which followed.

‘”Incommode us! Oh, not at all. It’s the most soothing concourse of sweet sounds I ever heard.”

‘”Pray, don’t let us disturb the concert with our sleeping.”

‘”Jerk us out a little more chin-music!”

‘”There’s no place like home with a baby in it.”

‘Just opposite where the man moved restlessly with the child was the bunk of a young giant whom I had noticed turning in earlier in the evening. He had not seemed to have noticed the disturbance, but now his curtains were thrust aside fiercely and he appeared, lifting himself on one elbow, and he asked in an angry tone:

‘”Say you, where’s its mother, anyhow?” The man replied in a low, weary tone, without looking round:

‘Well, you could have heard the silence that came over all the men. The baby’s screaming and the rush, and roar, and rattle of the train seemed unnatural breakers of the profound stillness. In an instant the young man, clad only in his under-flannels, was out on the floor and close to the man.

‘”Say, stranger,” he said, “if I’d knowed that, I’d a bit my tongue out afore I’d ‘a spoke! An’ now I look at you, my poor fellow, I see you’re most wore out! Here, give me the child, and you turn into my bunk an’ rest. No! you needn’t be afeered” – for he saw the father shrink away a little and hold the child closer. “I’m one of a big family, an’ I’ve nursed the baby often. Give her over! I’ll take care of her, an’ I’ll talk to the conductor, and we’ll see that you’re called when the time comes.” He put out his great hands and lifted the little one, the father resigning her to his care without a word. He held her in one arm whilst with the other he helped the newcomer into his empty berth.

‘Strange to say, the child made no more struggle. It may have been that the young blood or the young flesh gave something of the warmth and softness of the mother’s breast which it missed, or that the fresh, young nerves soothed where the worn nerves of the sorrowing man had only irritated; but, with a peaceful sigh, the little one leaned over, let its head fall on the young man’s shoulder, and seemingly in an instant was fast asleep.

‘And all night long, up and down, up and down, in his stockinged feet, softly marched the flannel-clad young giant, with the baby asleep on his breast, whilst in his bunk the tired, sorrow- stricken father slept – and forgot.’

There was a long pause, with here and there a sniffle, whilst down the faces of many the tears trickled. The first to speak was the Leading Lady. Her face was as a masque of tender feeling, and the yearning of her voice went straight to every heart:

‘That mother’s body may have been far distant from where her baby and her husband slept, but somehow I think that her soul was not very far away.’

Again there was a long pause, broken by the Low Comedian:

‘So that’s what you call a funny story! A pretty bally funny story it is, to make us feel like this. Look at me!’ His eyes were all blurred with crying. The next remark was made by the Sewing-Woman, a question asked with much anxiety:

And then everyone else in the saloon burst into a roar of laughter; the pent-up feelings of all had found a vent. The Second Heavies looked around with a complacent smile on his solemn face as he remarked:

‘If it wasn’t funny, what in thunder are you all laughing at?’

‘I think you are next, my dear,’ said the MC to the Singing Chambermaid.

‘Oh, I do wish someone would go on for me,’ she protested with a pretty embarrassment, or what was an excellent assumption of the same. ‘I do feel so bashful!’

‘That being a condition antecedent to soubrette success!’ interrupted the Tragedian. She smiled at him with a helpless little simper, and went on:

‘Couldn’t you give my understudy a chance?’

‘Not me!’ answered the latter quickly, ‘I don’t mind winging a part when there’s an accident; but you had your part in good time, and now, if you’re not letter-perfect, you must do your own fluffing!’

‘Quite right, too!’ said the Prompter, who was not, as a rule, attached to understudies. The Manager nodded approval, so the Singing Chambermaid, with an appealing look round the Company, went on: