The Occasion : Snowbound – The Record of a Theatrical Touring Party by Bram Stoker 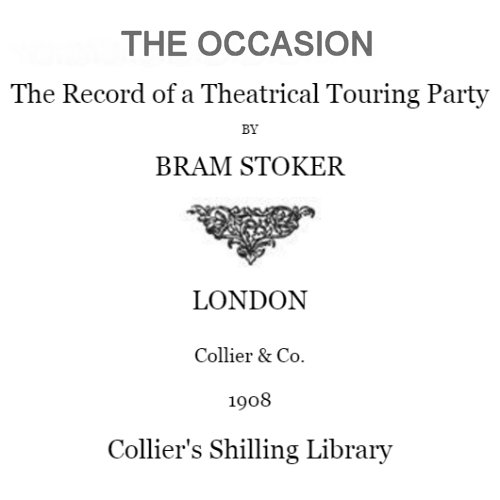 For a little while the train seemed to stumble along amongst the snowdrifts. Every now and again there would be a sudden access of speed as a drift was cleared, just as in a saw-mill the ‘buzz’ saw rushes round at accelerated speed as the log is cleaved, or as a screw ‘races’ when the wave falls away. Then would follow an ominous slowing down as the next snowdrift was encountered. The Manager, pulling up the blind and peering out on the waste of snow, remarked:

‘Nice cheerful night this; special nice place to be snowed up. So far as I can see, there isn’t a house between the North Sea and the Grampians. There! we’ve done it at last! Stuck for good this time!’ – for the slow movement of the train stopped altogether. The rest of the Company waited in anxious expectancy, and it was with a general sigh of relief that they saw the door on the sheltered side of the saloon open under the vigorous jerk of the Guard: anything was better than the state of uncertainty to which they had been reduced by the slow, spasmodic process of the last two hours. The Guard shook the rough mass of snow from him as he came in and closed the door.

‘Very sorry to tell you, Ladies and Gentlemen, that we’ve come to a stop at last. We’ve been fighting the snow ever since we left Aberdeen, and the driver had hopes we might win on as far as Perth. But these drifts are one too many for us. Here we are till daylight unless we can get some place nigh at hand for ye to shelter.’ The practical mind of the Manager at once grasped a possibility.

‘Why not go back to Aberdeen? We have cleared the road so far, and we should be able to run back over it now.’ The Guard shook his head.

‘That mecht do by ordinar’; but with a wind like this and such a snowfall as I’ve never seen the like of, we wouldn’t be able to run a mile. But, anyhow, the Stoker has gone out to prospect; and we’ll soon know what to expect.’

‘Tell the Driver to come here,’ said the Manager. ‘I should like to know exactly how we stand as to possibilities.’ As the door opened for his passing out, the keen blast of icy air which rushed in sent a shiver through the whole Company. They were all too miserable and too anxious to say anything, so the silence was unbroken till the Guard returned with the Engine-Driver, the latter muffled, his black, oily clothes additionally shiny with the running of the melted snow.

‘Where are we?’ asked the Manager.

‘Just about ten miles from anywhere, so far as I can make out. The snow falls so fast that you cannot see ten feet ahead, and the Stoker has come back, unable to get twenty yards away from the train.’

‘Then I suppose there is no help for us till the storm ceases?’

‘And we have to pass the night on the train without any sort of comfort that you can give us?’

‘That’s so.’ A groan from all followed the words. The Manager went on:

‘Then we must do what we can to keep warm at least. We must make a fire here.’ The Guard struck in sharply:

‘Mak’ a fire in the Company’s carriage, and burn the whole timing up to a cender? Ye’ll no mak’ a fire here!’ He spoke decisively. The Manager answered with equal decision:

‘Who will prevent us?’

‘By the authority of the Great North line which I represent. So tak’ ye formal notice that I forbid any fire in the carriage.’ He paused, self-satisfied.

The Manager, taking his writing-pad from his pocket, wrote a few words. Then he said suavely:

‘You understand I call on you as the representative of the Company to fulfil the Company’s contract and leave us in London.’

‘Ye know verra weel that I canna’ do it.’

‘So you admit that, relying, I presume, on the common law of force majeure to relieve you?’

‘Then read this paper; you see it is a formal notice. Now if you rely on force majeure, so do we; and we have a good deal more force majeure than you have! So here we’ll make a fire, and, if need be, we’ll fight your crowd in the doing of it. Brooke, you go to the workmen’s carriage and tell them to come here.’

The Call Boy departed on his errand, and the Manager, seeing that the Guard had caved in, went on more genially:

‘We’ll not do any harm, as you shall soon see; but, anyhow, we don’t mean to die like rats in a trap. Fire we must have, but we’ll so arrange it that there will not be any harm done. All our people will come in here, and your men can come also and share the warmth when we get it.’

‘Aye! when ye get it,’ murmured the Engine-Driver. The Manager smiled. ‘You will see!’ he observed. ‘I shall stage-manage this. You may look on and get a wrinkle for other snow-uppings.’

At this moment the door was torn open, and in rushed the half-dozen workmen, carpenters and property men, headed by the Master Machinist and the Property Master. The rear was brought up by the Baggage Master. The feet of all were clogged heavily with snow. The Manager spoke up just in time to prevent blows:

‘Be quiet, men! We are snowed up, and will have to make ourselves comfortable as well as we can. We must make a fire here. Ruggles’ – this to the Property Master – ‘can you get out any of the things from the vans?’

‘Quite easy, sir! We’re not loaded too full, and there is a clear way up the car.’

‘And you, Hempitch?’ – this to the Master Machinist.

‘Very well! We must first make a fire in this carriage -‘ Here the guard broke in:

‘Hush, man!’ said the Manager, holding up his hand. ‘You’ll see it will be all right. Just wait a while, and you will be satisfied; and then we shan’t have to knock you on the head or tie you up. Now, Hempitch, you get out the thunder and lay it here on the floor on the lee side of the car opposite this window; you will see, Guard, that the iron sheet will protect the floor. You, Ruggles, get a good lump of modelling clay from Pygmalion and make a rim all round to keep in the ashes. Then, Hempitch, have half-a-dozen iron braces and lay them on billets or a couple of stage boxes. On this platform put down one of the fireplaces – any one will do. Then, Ruggles, you will put a Louis XI chimney over it, with a fire backing behind, and make an asbestos fire-cloth into a chimney leading out of the window; you can seal it up with clay. The Engine-Driver here will bring us some live coals from his engine, and one of the carpenters can take his saw and cut down a piece of the fence that I saw outside made of old sleepers.’

The railway servants were intelligent men, and recognised the safety and comfort of the plan; so they went to the engine to get the live coals. When the workmen were bringing the coal, the Manager said to the Baggage Master:

‘You had better bring in a couple of baskets of the furs from Michael Strogoff; they will help to make us comfortable. And now, ladies and gentlemen, you had better produce your provisions. I see you have all hampers for the journey to London, and we can have supper. I have myself a big jar of Highland whiskey and we shall have as jolly a time as we can.’

All was bustle, and though for a while the saloon was deathly cold whilst the various things ordered were being brought in, the extemporary fireplace was so quickly organised and the fire burned so well that warmth and comfort were soon realised. The Engine- Driver brought one or two appliances from his own store, notably a flat kettle, which, filled with melted snow, was soon hissing on the fire. The Property Master produced crockery from his professional stores; and supper began amidst the utmost comfort and good humour.

When it was done, punch and tea were made and handed round, and pipes and cigars were lit. The Company, wrapped in furs, gathered as closely as they could get round the fire.

After a while the general buzz of conversation began to subside, and desultory remarks now and then marked the transition to absolute silence. This was after a while broken by the Manager with a sudden eruption of speech which seemed to awake the drowsy faculties of his companions. 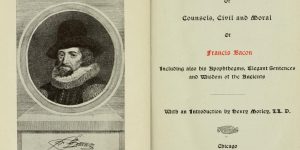