AUTHOR OF “THE LITTLE MINISTER,” “A WINDOW IN THRUMS,” “WHEN A MAN’S SINGLE,” “AULD LICHT IDYLLS,” ETC. 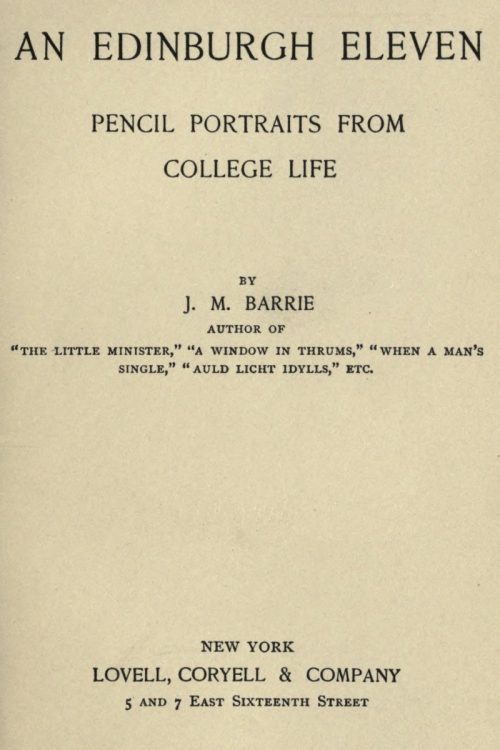 An Edinburgh Eleven : I. Lord Rosebery

The first time I ever saw Lord Rosebery was in Edinburgh when I was a student, and I flung a clod of earth at him. He was a peer; those were my politics.

I missed him, and I have heard a good many journalists say since then that he is a difficult man to hit. One who began by liking him and is now scornful, which is just the reverse process from mine, told me the reason why. He had some brochures to write on the Liberal leaders, and got on nicely till he reached Lord Rosebery, where he stuck. In vain he walked round his lordship, looking for an opening. The man was naturally indignant; he is the father of a family.

Lord Rosebery is forty-one years of age, and has missed many opportunities of becoming the bosom friend of Lord Randolph Churchill. They were at Eton together and at Oxford, and have met since. As a boy, the Liberal played at horses, and the Tory at running off with other boys’ caps. Lord Randolph was the more distinguished at the university. One day a proctor ran him down in the streets smoking in his cap and gown. The undergraduate remarked on the changeability of the weather, but the proctor, gasping at such bravado, demanded his name and college. Lord Randolph failed to turn up next day at St. Edmund Hall to be lectured, but strolled to the proctor’s house about dinner-time. “Does a fellow, name of Moore, live here?” he asked. The footman contrived not to faint. “He do,” he replied, severely; “but he are at dinner.” “Ah! take him in my card,” said the unabashed caller. The Merton books tell that for this the noble lord was fined ten pounds.

There was a time when Lord Rosebery would have reformed the House of Lords to a site nearer Newmarket. As politics took a firmer grip of him, it was Newmarket that seemed a long way off. One day at Edinburgh he realized the disadvantage of owning swift horses. His brougham had met him at Waverley Station to take him to Dalmeny. Lord Rosebery opened the door of the carriage to put in some papers, and then turned away. The coachman, too well bred to look round, heard the door shut, and, thinking that his master was inside, set off at once. Pursuit was attempted, but what was there in Edinburgh streets to make up on those horses? The coachman drove seven miles, until he reached a point in the Dalmeny parks where it was his lordship’s custom to alight and open a gate. Here the brougham stood for some minutes, awaiting Lord Rosebery’s convenience. At last the coachman became uneasy and dismounted. His brain reeled when he saw an empty brougham. He could have sworn to seeing his lordship enter. There were his papers. What had happened? With a quaking hand the horses were turned, and, driving back, the coachman looked fearfully along the sides of the road. He met Lord Rosebery travelling in great good humor by the luggage omnibus.

Whatever is to be Lord Rosebery’s future, he has reached that stage in a statesman’s career when his opponents cease to question his capacity. His speeches showed him long ago a man of brilliant parts. His tenure of the Foreign Office proved him heavy metal. Were the Gladstonians to return to power, the other Cabinet posts might go anywhere, but the Foreign Secretary is arranged for. Where his predecessors had clouded their meaning in words till it was as wrapped up as a Mussulman’s head, Lord Rosebery’s were the straightforward despatches of a man with his mind made up. German influence was spoken of; Count Herbert Bismarck had been seen shooting Lord Rosebery’s partridges. This was the evidence: there has never been any other, except that German methods commended themselves to the minister rather than those of France. His relations with the French government were cordial. “The talk of Bismarck’s shadow behind Rosebery,” a great French politician said lately, “I put aside with a smile; but how about the Jews?” Probably few persons realize what a power the Jews are in Europe, and in Lord Rosebery’s position he is a strong man if he holds his own with them. Any fears on that ground have, I should say, been laid by his record at the Foreign Office.

Lord Rosebery had once a conversation with Prince Bismarck, to which, owing to some oversight, the Paris correspondent of the Times was not invited. M. Blowitz only smiled good-naturedly, and of course his report of the proceedings appeared all the same. Some time afterward Lord Rosebery was introduced to this remarkable man, who, as is well known, carries Cabinet appointments in his pocket, and complimented him on his report. “Ah, it was all right, was it?” asked Blowitz, beaming. Lord Rosebery explained that any fault it had was that it was all wrong. “Then if Bismarck did not say that to you,” said Blowitz, regally, “I know he intended to say it.”

The “Uncrowned King of Scotland” is a title that has been made for Lord Rosebery, whose country has had faith in him from the beginning. Mr. Gladstone is the only other man who can make so many Scotsmen take politics as if it were the Highland Fling. Once when Lord Rosebery was firing an Edinburgh audience to the delirium point, an old man in the hall shouted out, “I dinna hear a word he says, but it’s grand, it’s grand!” During the first Midlothian campaign Mr. Gladstone and Lord Rosebery were the father and son of the Scottish people. Lord Rosebery rode into fame on the top of that wave, and he has kept his place in the hearts of the people, and in oleographs on their walls, ever since. In all Scottish matters he has the enthusiasm of a Burns dinner, and his humor enables him to pay compliments. When he says agreeable things to Scotsmen about their country, there is a twinkle in his eye and in theirs to which English scribes cannot give a meaning. He has unveiled so many Burns statues that an American lecturess explains: “Curious thing, but I feel somehow I am connected with Lord Rosebery. I go to a place and deliver a lecture on Burns; they collect subscriptions for a statue, and he unveils it.” Such is the delight of the Scottish students in Lord Rosebery that he may be said to have made the triumphal tour of the northern universities as their lord-rector; he lost the post in Glasgow lately through a quibble, but had the honor with the votes. His address to the Edinburgh undergraduates on “Patriotism” was the best thing he ever did outside politics, and made the students his for life. Some of them had smuggled into the hall a chair with “Gaelic chair” placarded on it, and the lord-rector unwittingly played into their hands. In a noble peroration he exhorted his hearers to high aims in life. “Raise your country,” he exclaimed [cheers]; “raise yourselves [renewed cheering]; raise your university [thunders of applause].” From the back of the hall came a solemn voice, “Raise the chair!” Up went the Gaelic chair.

Even Lord Rosebery’s views on imperial federation can become a compliment to Scotland. Having been all over the world himself, and felt how he grew on his travels, Lord Rosebery maintains that every British statesman should visit India and the colonies. He said that first at a semi-public dinner in the country—and here I may mention that on such occasions he has begun his speeches less frequently than any other prominent politician with a statement that others could be got to discharge the duty better; in other words, he has several times omitted this introduction. On his return to London he was told that his colleagues in the Administration had been seeing how his scheme would work out. “We found that if your rule were enforced, the Cabinet would consist of yourself and Childers.” “This would be an ideal cabinet,” Lord Rosebery subsequently remarked in Edinburgh, “for it would be entirely Scottish,” Mr. Childers being member for a Scottish constituency.

The present unhappy division of the Liberal party has made enemies of friends for no leading man so little as for Lord Rosebery. There are forces working against him, no doubt, in comparatively high places, but the Unionists have kept their respect for him. His views may be wrong, but he is about the only Liberal leader, with the noble exception of Lord Hartington, of whom troublous times have not rasped the temper. Though a great reader, he is not a literary man like Mr. Morley, who would, however, be making phrases where Lord Rosebery would make laws. Sir William Harcourt has been spoken of as a possible prime minister, but surely it will never come to that. If Mr. Gladstone’s successor is chosen from those who have followed him on the home-rule question, he probably was not rash in himself naming Lord Rosebery.

Lord Rosebery could not now step up without stepping into the premiership. His humor, which is his most obvious faculty, has been a prop to him many a time ere now, but, if I was his adviser, I should tell him that it has served its purpose. There are a great many excellent people who shake their heads over it in a man who has become a power in the land. “Let us be grave,” said Dr. Johnson once to a merry companion, “for here comes a fool.” In an unknown novel there is a character who says of himself that “he is not stupid enough ever to be a great man.” I happen to know that this reflection was evolved by the author out of thinking over Lord Rosebery. It is not easy for a bright man to be heavy, and Lord Rosebery’s humor is so spontaneous that if a joke is made in their company he has always finished laughing before Lord Hartington begins. Perhaps when Lord Rosebery is on the point of letting his humor run off with him in a public speech, he could recover his solemnity by thinking of the Examiner.